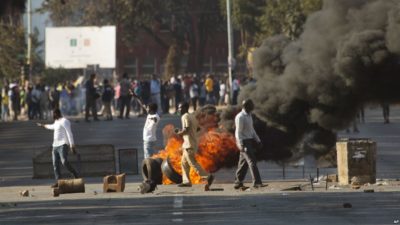 Reports say at least three people have been killed and several others injured in Harare as Movement for Democratic Change (MDC) Alliance supporters protested over election results showing an outright win for the ruling Zanu PF party in polls conducted Monday.

Some local and international independent newspapers put the number of deaths at four amid reports of skirmishes between the police, members of the Zimbabwe national army and other security agents in the capital, Harare.

MDC Alliance activists told VOA Studio 7 they won’t recognize the outcome of the polls saying the election was allegedly rigged by the Zimbabwe Electoral Commission (ZEC) in favor of the ruling party.

ZEC has denied any wrong doing, noting that it is impossible to rig elections in Zimbabwe.

Parliamentary poll results indicate a majority win for Zanu PF. Presidential election results are not yet out.

This is the first time ever that security forces have shot and killed civilians while election results are still being released by the electoral body.