In the second match of the series at Gaddafi Stadium in Lahore, South Africa captain Heinrich Klaassen decided to field after winning the toss. 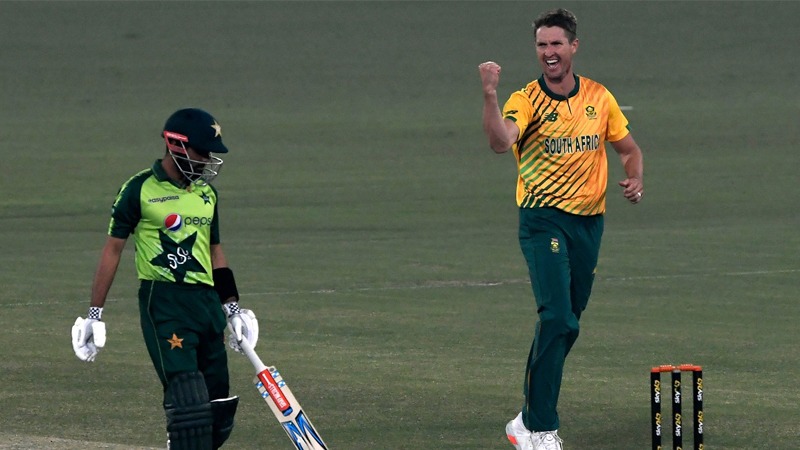 Muhammad Rizwan and Babar Azam started the innings for the Pakistan team but the captain failed to score again. Haider Ali and Hussain Talat, who came down one, were dismissed for 10 and 3 runs respectively.

Mohammad Rizwan once again played a brilliant and aggressive game and completed a half-century. However, Rizwan was dismissed for 51 runs, after which Faheem Ashraf tried to resist and scored 30 runs off just 12 balls, thanks to which the national team scored 20 runs. He scored 144 runs for the loss of 7 wickets in overs.

Janneman Malan and Reeza Hendricks from South Africa came on the field to chase the target. Shaheen Shah Afridi hit a four on the first ball of the first over but he showed Milan the way back from the field on the next ball.

The second over was very expensive for the Green Shirts, Harris Roof has given 15 runs in this over. In the third over, Shaheen Shah Afridi took another wicket without giving any runs. He overcame JJ Smuths for 7 runs with the help of Babar Azam.

The third wicket of the visiting team fell to Reza Hendricks for 98 runs. He fell victim to Usman Qadir after playing an innings of 42 runs off 30 balls.

South Africa won the second match against Pakistan by four wickets. With the victory of South Africa, the series of three T20 matches has ended in a draw now and the final and decisive match of the series will be played tomorrow.
No changes were made to the Pakistan team for the second T20 and the squad for the first match was retained, but South Africa made three changes to the squad.

In the first match of the three-match T20 series, Pakistan defeated South Africa by 3 runs.
—
Wasim Qadri, Islamabad based Senior Sports Journalist and Television Show host, can follow on twitter at @jaranwaliya