Source: $34bn set aside for roads rehab…‘We’re responsible for own development’ | The Herald

President Mnangagwa and his entourage take a walk across the Karanda Bridge after commissioning the bridge in Mt Darwin, Mashonaland Central Province, yesterday. — Pictures: Tawanda Mudimu

THE Government has set aside $33,6 billion for the Second Phase of the Emergency Roads Rehabilitation Programme (ERRP2) that was officially launched by President Mnangagwa in Mt Darwin, Mashonaland Central Province yesterday and which will create more than 20 000 jobs across the country.

This comes after a public outcry on the state of the roads that were damaged by the heavy rains which were received throughout the country during this rainy season.

Addressing a small crowd gathered to witness the commissioning of Karanda Bridge in Mt Darwin, the President said  Zimbabweans are responsible for their own development and the country will develop on its own without borrowing from anyone.

He said Zimbabweans will have to work for their supper and that without working there will not be any meaningful progress needed to attain Vision 2030.

“This launch is indeed a key milestone, as Zimbabwe forges ahead with modernising the national transport infrastructure, which is a key enabler for economic growth and development,” President Mnangagwa said.

Following an outcry from the public on the state of the country’s roads, the Second Republic, driven by the President’s motto of servant leadership decided to get down to business and ensure that all roads needing rehabilitation are attended to.

“My Government heard the outcry of our people as movement on our roads has become cumbersome, costly and indeed risky.

“As a result, on February 9, 2021, the Government declared the state of all our roads a National Disaster, thereby giving impetus to the operationalisation of the Second Phase of the Emergency Roads Rehabilitation Programme (ERRP2). This programme is vital given that roads are intricately linked with our economy within the country and beyond. Furthermore, a good transport network is an important cog in the realisation of a wide array of the sector priorities and objectives outlined in the National Development Strategy 1, as we journey towards Vision 2030.

“Hence, my administration remains seized with the provision and maintenance of sustainable infrastructure and other associated services.

“In this regard, $33,6 billion has been set aside for the second phase of the emergency roads rehabilitation programme. The programme sets out an ambitious and yet achievable target of rehabilitating 10 000km of road infrastructure of which 1 000km is in Mashonaland Central Province,” he said.

The President added that the launch of the ERRP2 could not have come at a more opportune time as the country is on Sunday set to celebrate its 41 years of independence with the province of Mashonaland Central having been the cradle of the Second Chimurenga which culminated in the attainment of independence in 1980. 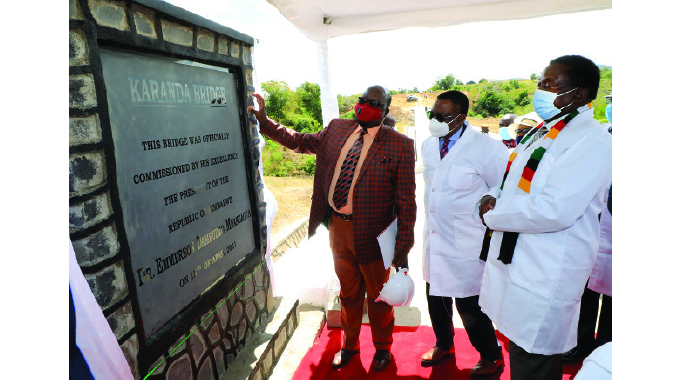 “As a country, we remain forever grateful for the losses, sacrifices and hardships endured by communities in all provinces, such as those here in Mount Darwin, Rushinga, Mbire and Muzarabani Districts, during the long years of the struggle. Our heroes fought hard so that we can enjoy the full benefits of owning our land, freedom, destiny as well as economic emancipation and empowerment for a better life for all.

“Us who are alive today have to see the full realisation of their admirable vision. It is this weighty obligation that inspired my Government under the Second Republic to implement the devolution and decentralisation agenda with a greater sense of urgency. The whole country bore the heavy consequences of colonialism, the fight was ours together, and we enjoy independence together as one people.

“Equally, our national social and economic development, growth and prosperity must be ours together. As the country begins this particular decade since the attainment of independence, no one and no place will be left behind.

“Obligated by this cardinal aspiration, my administration disbursed ZW$73,9 million to Mashonaland Central Province, during this first quarter of the year, (January to March) towards improved service delivery, development and equalisation projects.

Even though Zimbabwe is under punitive economic sanctions, with no access to international loans, the President said Zimbabweans must soldier ahead as none but ourselves can deliver the country to economic prosperity.

“The rehabilitation exercise will thus be funded through our own domestic resources and the use of our own talented people.

“I exhort the national road authorities to be focused and purposeful so that this expansive programme is speedily implemented within or ahead of set time frames. In addition, it is my expectation that as we roll out this strategic national programme, prudent financial management, good corporate governance, accountability, transparency and value for money remain guiding principles. Corruption of any form will not be tolerated.”

“The devolution and decentralisation agenda is premised on the need to enable the effective participation of communities in development prioritisation, planning, implementation and monitoring. Thus, the Emergency Roads Rehabilitation Programme 2 advances this agenda and also provides opportunities for broad-based empowerment of local private contractors and suppliers. The Emergency Roads Rehabilitation Programme Phase 2 is envisaged to create in excess of 20 000 jobs for local communities, including women and youth. Projects under the auspices of this programme, should hence be people-cantered, results-driven and answer the social economic needs of communities,” he said.

The completion of Karanda Bridge, the President said, is a demonstration of the Second Republic’s commitment to road infrastructure rehabilitation and modernisation.

“It will bring relief to commuters to surrounding communities, particularly patients accessing Karanda Mission Hospital. The project was wholly funded by the Treasury using internal resources. This is the approach my Government will continue to use going forward. I call upon beneficiary communities, to jealously protect these national assets,” the President said as he warned illegal miners against hunting for minerals everywhere.

The President also saluted the Church and other stakeholders for the role they play in national development.

“Allow me to take this opportunity to commend the role of various stakeholders, inclusive of the Church; as essential partners for sustainable socio- economic development. The contribution of the Church in particular to national development and social wellbeing of the citizenry is noted and most appreciated.

“I applaud the Evangelical Church for the exemplary and well renowned health care services offered at Karanda Hospital. Your role in complementing the Government in the provision of specialist health care services, human capital and skills development as well as the help to meet the spiritual needs of patients through devotion, evangelism and counselling is commended.”

Zimbabwe, the President said, is making progress in implementing projects in line with the SADC Regional Infrastructure Development Master Plan — Vision 2027, which calls for the rehabilitation, construction and maintenance of roads that connect to regional and continental trade corridors.

The rehabilitation and modernisation of the Harare Masvingo-Beitbridge road which has seen 158 kilometres now open to traffic as well as the Binga- Karoi road development and the Harare-Chirundu, Boli Sango, Mvurwi -Kanyemba roads, among others fall in the category.