The national vaccination programme accelerated further last week, exceeding 500 000 doses a week or an average of more than 70 000 a day as the number of Zimbabweans to get at least one dose went over 2,3 million and number of fully vaccinated went over 1,45 million.

At the same time, the third wave continued to recede, although somewhat slowly, with the average number of new daily infections falling to 376 by Saturday, significantly down on the average of 566 a week earlier.

However, this is still just over 10 times the rate seen between the end of the second wave and the start of the third wave, but only about a seventh as severe as what was seen at the peak of the wave in the middle of last month. 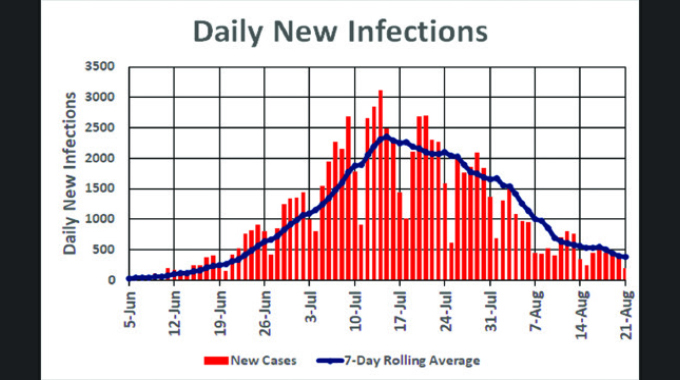 Changes in death rates tend to lag around two weeks behind the changes in infection rates because those who die tend to have become infected a week to three weeks earlier.

But the continuing good news is the rising vaccination rate, which jumped by around 25 percent last week moving from around 400 000 a week to over 500 000 a week, as well a setting a new record last Tuesday of over 100 000 doses in a single day.

With 2 301 641 people having had at least one dose by Saturday, more than 15 percent of the total Zimbabwean population of 15 million is now in the programme and more than 23 percent of the initial target of 10 million have received their first dose.

The number fully protected with both doses, 1 450 981 by Saturday, is 9,7 percent of the total population and 14,5 percent of that initial target of 10 million.

The Government has increased the allocation of cash to buy vaccines from US$100 million to US$140 million to ensure that the supply chain remains fully funded.

Zimbabwe’s vaccine procurement programme has been rated the best in sub-Saharan Africa and comparable with the sort of programmes seen in developed countries. 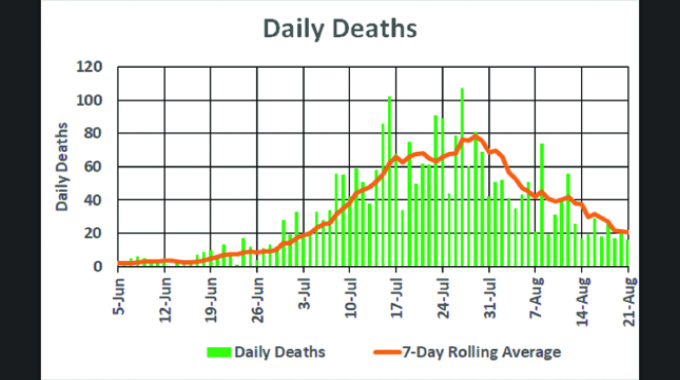 At the same time, the Government has been working continuously on upgrading the delivery of vaccines, increasing the number of teams and upgrading their efficiency so each team can deal with more people.

In rural areas, mobile teams are now visiting the village vaccination points, which is generally useful for communities, but critical for the elderly and infirm who would find it very hard to get to the nearest clinic.

Vaccination has been evenly spread across the nation.

But even Matabeleland South, the province with the lowest population, has seen 119 606 first doses and 70 878 second doses.