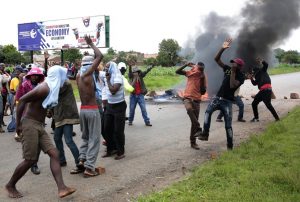 Protestors during a demonstration over the recent fuel price increase in the suburb of Warren Park, Harare. January 15, 2019. EPA Images

DOZENS of Epworth residents over the weekend walked out of Chikurubi Maximum Prison after a
Zimbabwean court acquitted them on charges of committing public violence during anti-government
protests held across the country last month over the country’s worsening economic conditions.
Harare Magistrate Francis Mapfumo on Friday 15 February 2019 set free 51 Epworth residents, who were
arrested on 14 January 2019 and charged with public violence as defined in section 36 of the Criminal Law
(Codification and Reform) Act.

The Epworth residents were accused of barricading Chiremba road using stones and burning some vehicle
tyres and pulling down a sign post at a police station, which disturbed the free movement of traffic and
members of the public.

But Magistrate Mapfumo on Friday 15 February 2019 acquitted the 51 Epworth residents, who were
represented by Nontokozo Dube-Tachiona, Kossam Ncube and Gugulethu Mahlangu-Simango of
Zimbabwe Lawyers for Human Rights, after discharging them at the close of the prosecution case.
Magistrate Mapfumo ruled that the state failed to establish a compelling case against the Epworth residents
which would warrant that they be placed on their defence.

The Magistrate ruled that the evidence led during trial by the state was shown to be manifestly unreliable
hence it was not safe to rely upon it and that most of the accused persons were not even placed at the
scene of the crime as no one claimed to have identified them committing any offence.
The trial of the remaining seven Epworth residents who were put to their defence continues at Harare
Magistrates Court on Tuesday 19 February 2019.

Meanwhile, ZLHR lawyers also secured freedom for Mark Viyazhi and Phillip Chimbare, who were
represented by Rudo Magundani of ZLHR and had been on trial after they were arrested for allegedly
participating in the anti-government demonstrations held in January.