A Humanitarian Response to the Crisis in Zimbabwe

In November 2019, the UN’s Special Rapporteur on the Right to Food described Zimbabwe – a country once hailed as the bread basket of Africa – as a state on the brink of man-made starvation.

Source: A Humanitarian Response to the Crisis in Zimbabwe | Inter Press Service 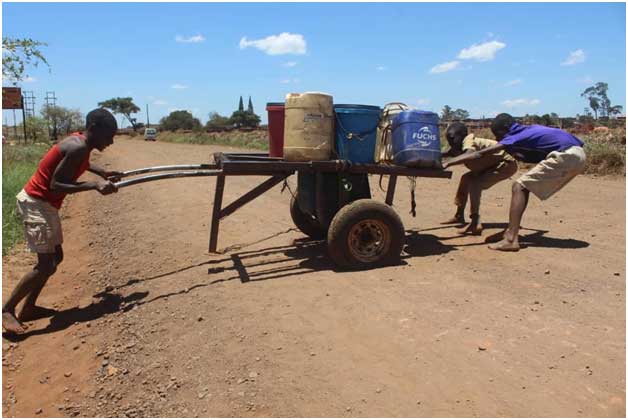 Location: Mt Hampden, 30km outside Harare The water-shortage crisis has worsened recently due to the drought. Children are missing school twice a week. Women are being abused at water sources. Children and women are walking up to 2 kilometres to access water. Credit: Lovejoy Mtongwiza (Twitter: @LJaymut10), award-winning Zimbabwe-based photojournalist.

HARARE, Zimbabwe (IPS) – In November 2019, the UN’s Special Rapporteur on the Right to Food described Zimbabwe – a country once hailed as the bread basket of Africa – as a state on the brink of man-made starvation.

Some 5.5 million inhabitants are food insecure, with over 2 million also lacking access to essential services such as healthcare and clean water. These numbers are expected to rise to over 8 million and 3.5 million respectively in 2020, affecting some 60% of the population.

At the end of January, a Humanity First team led by Tahir Ahmad, its head of humanitarian operations, travelled to Zimbabwe to lay plans for humanitarian response efforts and set up a Zimbabwean office.

Humanity First is an international aid agency, registered in 43 countries across six continents, which has been working on human development projects and responding to disasters since 1994.

Excerpts from the interview:

Craig Dube:
What brings you to Zimbabwe, and what have you found?

Tahir Ahmad:
When we initially came here in 2018, in the wake of Cyclone Idai, we saw that Chimanimani [in southeastern Zimbabwe] was an area that seemed isolated, but was not alone in terms of need. In the problems people there were experiencing because of the cyclone – hunger, thirst, the lack of decent shelter and healthcare provision – they weren’t alone. These conditions were widespread wherever we went, even in Harare.

We’re back in Zimbabwe now to get things moving faster: get all the infrastructure in place, get everyone trained up very quickly, do needs assessments and help local Humanity First staff understand how to translate their needs assessment into project proposals that we can look at, get funds and mobilise quickly to do the work.

CD: What will Humanity First prioritise?

TA: We just came back from Mashonaland West province, and I remember driving away from every area thinking, “This challenge is too big for us”. The people there need… everything. But there are some core needs, like food and running water.

I’m a bit breathless at the moment: I saw so many people and their needs are so diverse. We were in urban areas where there were number of functioning boreholes, their hand pumps were working fairly well, and the water was flowing nicely. But this was put into perspective when an old woman told us: “The distance is fine – when I was well and when we were eating food. Now we don’t really have the strength to walk that distance.”

The price of maize, for example, is just ridiculous in the context of people’s income. In some areas the average wage is about three hundred [Zimbabwean] bond dollars per month (about USD$15), but a 10kg bag of maize is 100 bond dollars.

People are so hungry, and the heat is searing. They need sustainable food supplies, and purified water, too. Many are resorting to getting water from lakes, and there’s a risk of cholera, typhoid, or — at best — diarrhoea.

Many women want to sew to bring some value into their local economy. But if they’ve got a sewing machine, it’s either broken or they have no way of powering it any more.

We saw many instances of grandmothers who no longer have children, for various reasons – including deaths, illness or abandonment – and are living in dire poverty, with a yard full of grandchildren

We saw people who were unable to work because of cataracts; one grandmother we met was pretty close to blindness because of them. Before that, she had been able to sustain her family; she had some technical expertise in carpentry, and she had sold food as well. If we restore her sight, it’ll make a big impact not only for her, but for the nine grandchildren she’s looking after.

There are plenty of elderly people who are completely immobilised, and disabled kids who need special care and attention; wheelchairs, or at least crutches. It’s more a case of what don’t they need, really, than what they need. If I told you what they need, I’d be here all day.

CD: How do you make change happen as an organisation? What capacity do you have to say, “These are the things we can do to bring change”?

TA: As an organisation, our expertise is about mobilising logistics, it’s not just about supplying immediate needs. One thing we’re looking to do is a root cause analysis, which is essentially:

Because of poor irrigation systems.
This root cause analysis is a process of asking, why, why, why?

There are a number of places where, if we could just get a few boreholes installed, we could give farmers access to water, perhaps fund a few irrigation systems. Not install them ourselves, but fund people to do it, which will give them the ability to self-sustain. In the meantime, though, there are areas that need food now.

I simply don’t see enough of a marketplace where we can say, here’s some cash, some vouchers or some EcoCash [mobile money]; go buy your own food. The marketplace is not functioning well, and the supply is not flowing well enough to serve the number of people we want to serve. Once we get that immediate stuff done, then we’ll be looking at, how we turn immediate assistance into development. We are looking at sustainable livelihoods.

CD: As a Zimbabwean, I find it hard to imagine the scale of the challenges some regions of my country are facing.

TA: Absolutely. You can go to a shopping mall in Harare and buy coffee and a few cakes, and that’s the equivalent of five people’s monthly wage in some rural areas.

CD: What people and organisations will Humanity First be engaging with in Zimbabwe?

TA: Operational partnerships happen out there in the field. You bump into people, you go to coordination meetings, and you try not to duplicate efforts. The key thing is getting an understanding of the operational environment.

We spent a big chunk of this trip talking to multiple NGOs and the Zimbabwean government. NGOs and other actors tend to work in isolation, but this time I think everyone’s seen that the challenges are big. You cannot not work together.

CD: In 2020, why do we still need humanitarian aid organisations?

TA: A few years ago, the future of aid was cash transfers. But everything is dependent on the marketplace and the environment, because every disaster or crisis is different. The solution has to be government-led, and in Zimbabwe, it is to a degree. It is about investing resources in manpower and human capital development, planning and programming toward that end goal of human development.

When we talk about aid, we talk about humanitarian actors coming in… and in many cases not being very effective. It’s because traditionally they have just been treating symptoms, where, if people are hungry, they don’t ask why, they just give food and walk away.

So, the challenge for us, and for many organisations, is thinking about what the end status we want to see is, and who we need to work with to make it happen, although that’s a very simplistic way of putting it.

CD: How do you ensure that the people and areas you serve do not become aid dependent?

When you look at the root-cause level, Zimbabweans are looking for ways to support themselves. Communities genuinely understand that food supplies aren’t always sustainable. You can do a six-month [food aid] programme, but there’s little point if people will be starving in the seventh month.

If instead you have a sustainable livelihood focus, and invest the time in your assessments, speak to as many people as possible, understand local economies, and understand the systems and see how one factor within a local economy can have massive repercussions in the wider economy within a good systems thinking frame, then you can have massive impact in terms of sustainability.

CD: What are the key challenges for Humanity First’s work in Zimbabwe?

TA: It’s not going to be the government or their structures – counter to what I thought would be the case. I mean, the government is doing the best they can. I’ve had a few meetings with ministers and they are leveraging all the help they can get. I know there are a lot of detractors of the Zimbabwean government, but every meeting I’ve had has been very welcoming. They have only been enablers.

The big challenge is going to be inflation. It’s going to be people’s ever-greater needs, if we’re not fast enough. We are racing against the clock – and that’s the whole humanitarian community, not just us.

We need to act fast enough to fight issues like cholera, typhoid and malnutrition. We need to get here and start working straightaway in a coordinated manner.

CD: What makes you hopeful?

TA: We did a community gathering with 500 people in Mashonaland West. We had only asked for 100, but many more people came; and some had travelled 7 km or more. And what gave me hope, in dialogue with them on both an individual level and a focus group level, was their resilience.

I found myself thinking, what if this had happened to me? I have no idea what I would do. I imagined having no income at all and no one to rely on, no vertical resilience coming from the state, and not being able rely on my friends or family or the wider community. I wouldn’t know how to survive.

But the people we met were doing it. Imagine: you have no food, no electricity, no water, no transportation, no IT capacities, no ways to communicate and you’ve got a limited skillset. What do you do? But they make it happen: Zimbabweans’ resilience makes me hopeful. They are tough as nails, but time is our challenge.

*Craig Dube is a Zimbabwean native and health equity professional working in the fields of socio-political determinants of unequal health outcome and poverty alleviation. He is a 2018-19 Atlantic Fellow for Social and Economic Equity. Craig completed an MSc in Inequalities and Social Science at the London School of Economics in 2019, followed by a traineeship at Oxfam UK.