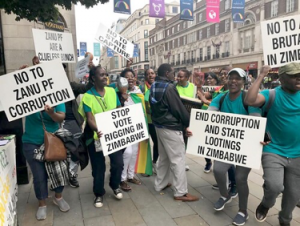 At a time when there is a shortage of virtually everything except poverty and corruption, the tale of the one-day bush bakery in an open maize field seems to sum up what is wrong in Zimbabwe.

Newsday tells the story: ‘A rudimentary bread oven that was officially opened by two ministers in Makonde amid pomp and fanfare has been closed barely 24 hours after it became operational.’

A local villager said they were not aware the project until the ministers arrived to commission the oven, which uses firewood and could produce 500 loaves a day.

‘The moment the ministers went away everything came to a halt’, he said. Not surprising as the 50 kgs of flour delivered on the day had been exhausted.

The usual Herald report hailing a pioneering government project to relieve rural poverty failed to materialize, probably because  one of  the ministers, Environment, Tourism and Hospitality Minister Priscah Mupfumira, was arrested on her return to Harare under new powers given to the Zimbabwe Anti-Corruption Commission over an alleged $95 million corruption scandal.

Mupfumira was previously Public Service, Labour and Social Welfare Minister in charge of the national social security authority, which looks after the tempting billion-dollar state pension fund and was the subject of a critical audit report still to be published by the government.

MDC leader Nelson Chamisa says corruption has become ‘a national anthem’ and life has become unbearable with ‘no fuel, no power, no money, no passports, no jobs and no food’.

He called for seven days of national prayer, fasting and intercession by Zimbabweans inside and outside the country beginning on Monday, ahead of what he said would be decisive steps by the party to rescue the country.