Source: A step towards an inclusive Gwanda through disability awareness and sign language training – NewsDay Zimbabwe 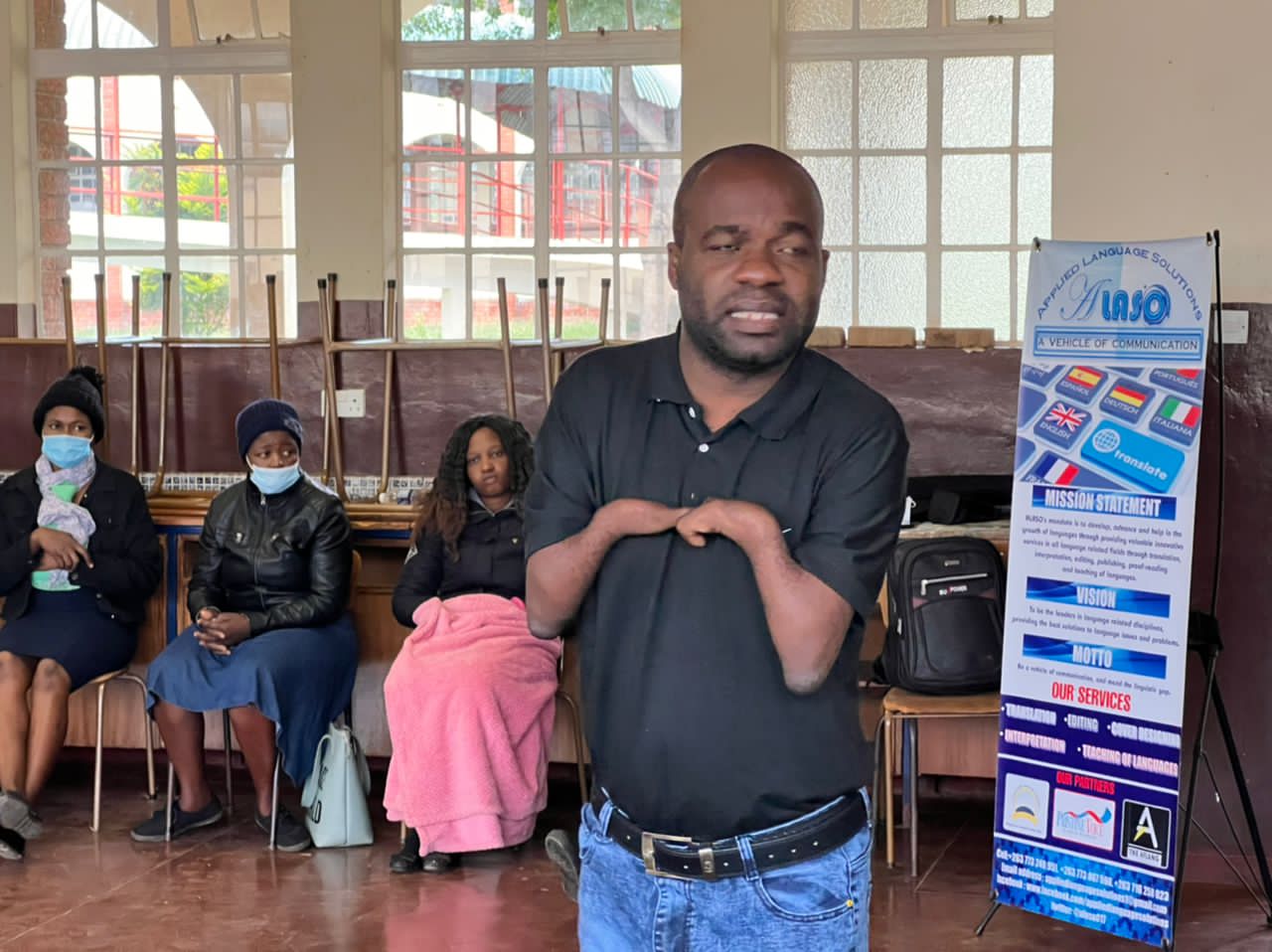 By Sipho H. Sibanda
Nkomwa Foundation Trust (henceforth NFT), partnered with Alaso Academy together with Sunrise Sign Language Academy and held a week-long sign language and disability awareness workshop which was running under the theme “leaving no-one behind” from 19-22 April 2022 in Gwanda.

NFT is an organisation based in Gwanda that focuses on disability awareness and helping PWDs based in Gwanda urban and rural has more than 200 beneficiaries ranging from 0-35 years.

The workshop was attended by participants from as far as Plumtree while others were coming from Filabusi and the rest being Gwanda residents. Pastors, police officers, nurses and teachers were also in attendance with other organisations like Lesego Memorial Trust and Ntepe-Manama Community Radio station being represented.

All participants showed great appreciation to the organisers of the workshop with one of the attendees stating, “Sithanda ukubonga abe NFT kakhulu kanye labe Alaso Academy abavele khonale eHarare bezosifundisa labeSunrise. iGwanda izasala isilomahluko njalo lathi sesizenelisa ukuxoxa labangane bethu” (We would like to thank NFT together with Alaso Academy which came all the way from Harare to teach us and also Sunrise. Gwanda will never be the same again and we will also be able to converse with our friends).

In an interview, Douglas Mapeta, founder and board chairperson of Sunrise Sign Language Academy said the workshop was meant to empower community members through sign language training.

“It is the thrust of the three partners, Sunrise Sign Language Academy, Nkomwa Foundation Trust and Alaso Academy to empower communities through training Sign language and disability awareness to destroy stigma and discrimination amongst everyone thereby leaving no one behind,” he said.

“The Gwanda community welcomed the initiative with both hands and showed their appreciation to the organisers and facilitators by attending in their numbers. “Through this initiative, we have managed to train Gwanda urban and rural in Sign language and disability awareness which was well received and more trainings are on the cards for Gwanda Polytechnic and other churches in Matebeleland South,” Mapeta added.

Sipho H. Sibanda who is the founder of Alaso Academy, indicated that the main idea is to go to reach out to the communities and meet the general public at their point of need as community engagement ensure quality results, adding that it helps his academy to achieve its goals which includes a vehicle of communication and this is only possible when communities and equipped with language skills.

NFT founder and director, Pick Nkomwa said that that the foundation had identified challenges faced by PWDs.

“Nkomwa Foundation Trust, identified and acknowledged the challenges faced by deaf people in our societies. people with speech impairment and hearing impairment face challenges which include limited access to information. we are all aware that Sign language interpretation in Zimbabwe is only available on the news, which a few of our speech impaired friends can access. information is usually passed through radio news and program which they are unable to access. there are communication barriers in the community at large, which may result in wrong interpretation and lack of access to information at all,” he said.

A day before the workshop ended, on the 21st of April, the team went to Gwanda, ward 16, were they met with the rural community at Mapate Business Centre. They also offer Sign language trainings and disability awareness for free to the community.

The ward councils, village heads, and the rest of the community really showed appreciation and invited the team to come back again to teach them more on Sign language and Disability issues.

Alaso Academy is an institution based in Harare that teaching up to nine languages inclusive of Sign language and translation and interpretation. They also offer translation, interpretation, editing, proof-reading, subtitling, voice-over, transcribing and cultural consultancy services.

Nkomwa foundation trust is an organisation based in Gwanda and they offer assistance to PWDs in Matebelaland South. To date, they have more than 200 beneficiaries.