A very Zimbabwean (not) coup 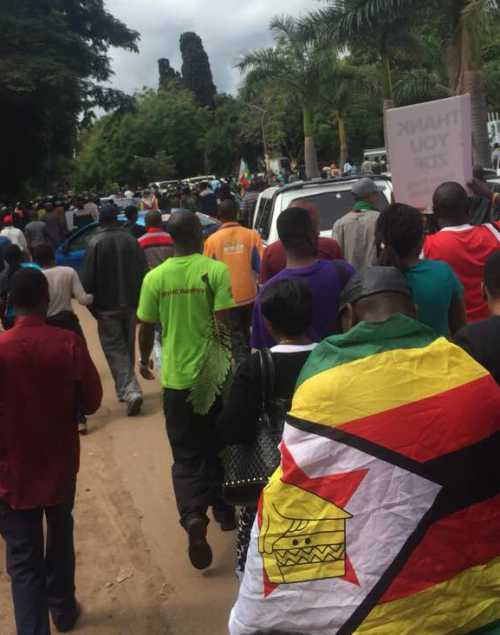 It has been a dramatic week in Zimbabwe. There has been a (not) coup, Robert Mugabe has been expelled from ZANU-PF, but so far has not stepped down from the presidency. No-one could have predicted this, and no-one can guess what will happen next. I will not try, but just offer some links to some other commentary.

So what happened? The tanks rolled in, an officer in army fatigues made announcements on the TV, and the rumour mill on social media exploded. It certainly seemed like a coup. For those of us with links to Zimbabwe, we stayed up much of the night, had our attention diverted during meetings the next day, as we kept checking Twitter feeds and WhatsApp messages to make sense of the confusion.

And then, all smiles, General Chiwenga, the head of the army, appears at State House with President Mugabe, and a delegation of South Africans, plus a Catholic priest for negotiations about the departure of the president and a transfer of power. Photos were taken and tea was had. And bizarrely, negotiations on-going, the next day the President shows up at a graduation ceremony in full academic regalia. It could not have been scripted.

On Saturday, people of all races, creeds and political backgrounds, marched on the streets alongside the army, celebrating the possibility of change, and rejecting the meddling external intervention of SADC and the AU. The marches were a spectacular demonstration of peaceful, non-violent solidarity with the defence force’s intervention, although questions must be raised about what was being backed.

And then on Sunday, ZANU-PF removed Robert Mugabe as head of ZANU-PF, replacing him with Emmerson Mnangagwa, recently dismissed as Vice President. Others in the G40 group, led by Mugabe’s wife, Grace,  were also expelled, with threats of prosecutions to follow. Later on Sunday evening, after a long wait, it got even more bizarre. Everyone, possibly even the generals in attendance, thought this was the resignation of the president, but in a long and rambling speech and much shuffling of papers, it ended with thank-you and goodnight, polite applause and a stunned silence from the rest of the world.

We must remember that this is no people’s revolution, but is all part of a long-running generational struggle over power within ZANU-PF, with Emmerson Mnangagwa’s Lacoste faction, backed by the army and firmly rooted in the older generation with liberation war credentials, ousting the younger G40 faction, with Grace Mugabe as its figurehead. That, as ever, the focus has been on Robert Mugabe himself may ultimately be missing the point. Many of the potential players in any new dispensation have long, often extremely murky, histories; are embedded in complex business networks and have deep security service connections. It’s a complex web woven over many decades, and it will not be easy to unravel, even under the veneer of constitutional transition. For the opposition groups in any prospective transitional authority, the ZANU-PF network will be tough to influence, as they found to their cost during the Government of National Unity from 2009.

What happens next remains very uncertain. Impeachment proceedings are starting, but these may not be as straightforward as some suggest. A resignation may yet happen, but since this is officially not a coup, the army are playing by the constitutional rule-book. There are a lot of constitutional lawyers in Zimbabwe, from all sides, it seems.

It has been an extraordinary, exhausting week. No panic, no violence, and (so far) all very civil. Very Zimbabwean. Blessing Musariri offered an amusing commentary on the mood. There was lots of humour in the Twitter commentary too. Suggestions that General Chiwenga and the Zimbabwe National Army might be deployed at the Emirates to deal with a long-standing succession question at the Arsenal. The #apolojersey meme that began circulating after ZANU-PF Youth League head Kudzai Chipanga, wearing a jersey and showing poor fashion judgement, apologised on TV for criticising the army. Tweets suggested that all apologies forthwith should be done while wearing the jersey, and there were many photo-shopped suggestions of who should do so. And then there was the outline script of the Hollywood film was proposed, with American actors playing all the leading roles and unable to pronounce Mnangagwa and Zimbabwe. And of course the much shared comment that Zimbabwean coups are so much more peaceful than elections, and that they should be held every five years (retweeted approvingly all over Africa).

This social media melee was the only way of getting information; things have been happening so fast. Thanks to @TrevorNcube in particular for keeping a lid on the speculation, and checking before informatively tweeting. Invaluable. In the UK, you are of course subject to the ill-informed mainstream media barrage on Zimbabwe. The narrative of decline is endlessly trotted out: the ‘basket case’ of Africa, a cabal of incompetent cronies at the helm, the ‘disaster’ of land reform, and on and on. Tedious, tiresome and very often inaccurate.

But unlike on previous occasions when Zimbabwe has hit the global headlines, there are some really thoughtful Zimbabweans available for the TV and radio punditry. Alex Magaisa and Miles Tendi, coming from different angles, were great. It’s excellent to have Zimbabwean profs in our UK universities to give a sophisticated, nuanced take. Most journalists are just too lazy to get into the detail, but assume they know the story without asking the questions. A point made by the brilliant Petina Gappah in a perceptive tweet (@vascodagappah). One exception (and of course there are more) is @fergalkeane47 from the BBC who, thanks to his superb reporting from South Africa in the early 1990s, knows the southern African context, and vitally its history, well.

What more in-depth commentaries have I found useful? Here are a few:

All of these analyses are fast being superseded by events. We don’t yet know the configuration of any new political settlement. In the process, complex manoeuvres must show that this was all aligned with the constitution, and not a coup. Those likely to back any new regime – China, South Africa and the UK are key – all need to be convinced.

Change in Zimbabwe has most definitely long been needed. Ironically, Mugabe’s undoing has been a result of perhaps his greatest legacy: a highly educated population – and elite political-military class – able to mobilise effectively, and in this case together. However, whatever happens in the next days and weeks, Zimbabwe’s problems have certainly not gone away, and these momentous events are only a beginning. Hopefully a longer-term, democratic transformation will occur, but it is far from assured. Just as with Zimbabwe’s Independence in 1980, issues of land, agriculture and rural livelihoods will be central. More commentary on this on Zimbabweland in the coming months.