Joseph Madzimure
Senior Reporter
AS Zimbabwe joins the rest of Africa in celebrating Africa Day today, political parties have called for the total independence of the continent, not only politically but also economically.

Annually, Africa Day is celebrated on 25 May to reflect and strengthen the foundation of the Organisation of African Unity (OAU) on May 25 1963.

The day, which is being held under the theme “Arts, Culture and Heritage: Levers for Building Africa we Want”, is not only celebrated on the continent, but around the world as the continent and its Diaspora reflects on its triumphs against imperialism, colonialism and slavery.

In Zimbabwe, the highlight of the celebrations will be the unveiling of the statue of Mbuya Nehanda, the celebrated early struggle icon who not only resisted the incursion by the British into Zimbabwe during the First Chimurenga but also inspired later generations to take up arms and dislodge the colonial yoke during the Second Chimurenga.

Currently, Saharawi Arab Democratic Republic is the only African country which is still under foreign occupation.

Speaking ahead of the 58th African Union commemorations, Cde Mumbengegwi said there is need to put maximum effort towards total independence on the continent.

“As we celebrate Africa Day, we celebrate the liberation of the continent and the commitment that Africa’s independence would not be complete, unless and until all the African countries were free from colonial rule.

“This objective is almost achieved but has not been fully achieved because we still have Western Sahara, the Saharawi Arab Democratic Republic which is still under colonial occupation. The irony of the colonial occupation is that the occupying power is another African country, Morocco, something which was never imagined in the heyday of the African Liberation struggle.

Africa Day, he said, is an extremely important day on Africa’s calendar and that of Zimbabwe as it is all about independence.

To underline this, Cde Mumbengegwi said the organisation set up the African Liberation Committee whose main task was to mobilise support for the Liberation Movement on the African continent.

“It is a day that we recall, the journey that we have travelled over the years. Africa went through one of the most terrible periods in its history when our fathers and mothers were forcibly taken away as slaves to the Americas, many perished on the way even after slavery has been banned, Africans never enjoyed equal status with their European counterparts. 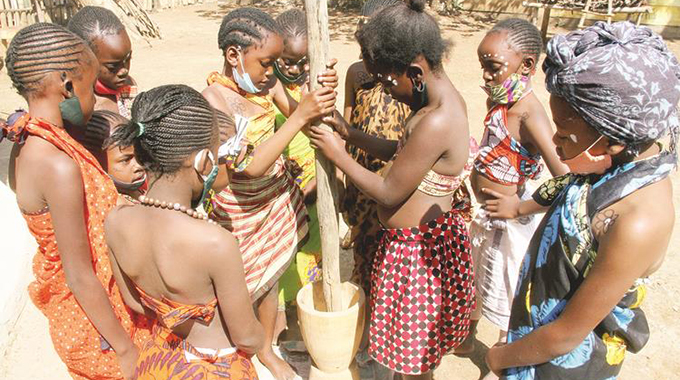 Marlborough Primary School pupil Florence Chitongo (left) and Rutendo Marunza use a mortar and pestle while their colleagues look on during a visit to Tauya Kumusha cultural centre in commemoration of Africa Day in Harare yesterday. (See picture on Page 5) — Picture: Kudakwashe Hunda

“Immediately after the banning of slavery, the Berlin Conference took place and Europe partitioned Africa. It took several years of bitter African struggle to liberate the rest of Africa. As we speak only Western Sahara is still under colonial rule. Otherwise, the rest of Africa is now free. The dream that our founding fathers of Africa always had was to form a united Africa with a single governing authority,” he said.

“We have been invited by His Excellency President Mnangagwa to accompany him at that event. As Polad members, we cannot divorce ourselves from the hype of activities and commemorations around Africa Day. In fact, one of the exciting events tomorrow is the unveiling of our icon Mbuya Nehanda’s statue.

“We want to reflect on the milestone and achievements covered as a country and we believe that we are maturing as a nation in terms of our politics, with the current situation where the opposition and the ruling party are working very closely on issues of national development,” said Mr Hlabangana

Another Polad member, Mr Divine Hove, said Africans should not be compromised by the dependency syndrome from former colonisers.

“As Africa we need to appreciate a number of things. Africa is still compromised by its dependency on its former masters, particularly on financial dependency, on the issues of the models of economic systems, how to run the economic systems.

“On the market structures even of natural resources, we will find that some arrangements have created unfair leverage on African administrative purposes such that the ability for Africa to move forward in the thrust that it wants becomes very compromised.

“We still have Western governments finding a way of influencing the direction of policies in Africa, finding a way of financing political activities in Africa and ways of initiating conflicts with the ultimate purpose of causing confusion. The neo-colonialism mentality is still there,” said Mr Hove.

He commended African leaders for condemning corruption, openly describing it as cancer which destroys African economies.

The OAU was formed in a meeting of over 30 African nations to influence the decolonisation of African countries, including Angola, Mozambique, South Africa and Zimbabwe.