President Emmerson Mnangagwa will launch the $46m project which will replace the colonial-era building – and more. 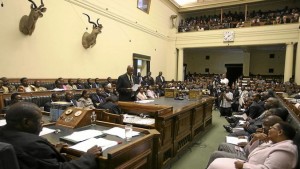 Zimbabwe’s President Emmerson Mnangagwa is expected to break ground for the building of a new parliament, the information ministry has tweeted.

The building which is to be located on farmland north-west of the capital, Harare, will have a total floor area of 33,000 square metres.

When completed it will replace the current parliament building, built in the colonial era, which the government has said is too small to house its more than 200 lawmakers.

An artist’s impression of the building, which is being funded by China, has been shared by the information ministry: