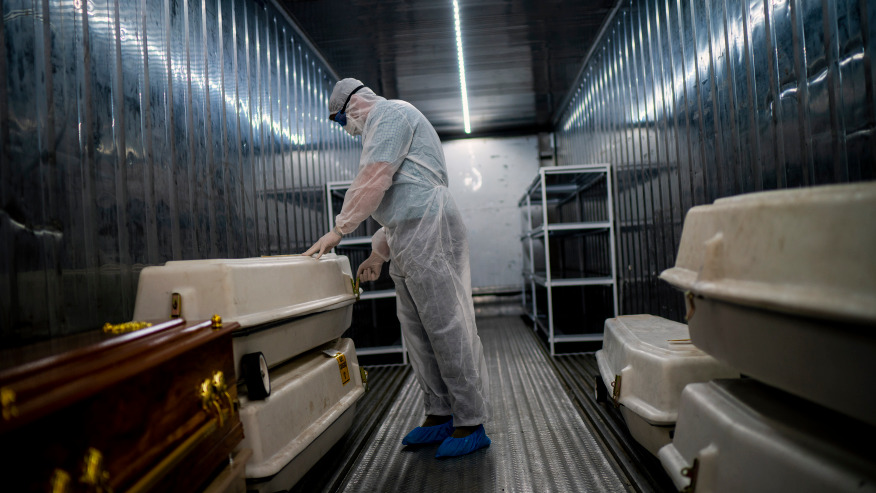 An AVBOB mortuary employee wearing full PPE checks coffins containing the remains of COVID-19 victims in a refrigerated container in Johannesburg, Tuesday, Feb. 2, 2021, one day after South Africa gave a hero’s welcome to the delivery of its first COVID-19 vaccines — 1 million doses of the AstraZeneca vaccine produced by the Serum Institute of India. (AP Photo/Jerome Delay)

JOHANNESBURG (AP) — Shipping containers have become overflow mortuaries for the dead from COVID-19 in South Africa, while some other African nations are now looking to China for the next wave of vaccine doses.

South Africa is working to launch its vaccination campaign in mid-February after its first delivery of vaccines on Monday: 1 million doses of the AstraZeneca vaccine produced by the Serum Institute of India. An additional 500,000 are coming later in February.

South Africa will use the doses to inoculate its frontline healthcare workers as the country aims to vaccinate 67% of its 60 million people by the end of the year.

Driven by the more infectious variant, 501Y.V2, now dominant in the country, South Africa had a resurgence of COVID-19 that saw confirmed cases, hospitalizations and deaths reach nearly double the numbers of the first surge last year.

“If you compare the number of funerals that we are dealing with currently as compared to the same time last year, for example, there’s been a significant increase,” marketing manager Marius de Plessis said.

South Africa has had more than 1.4 million confirmed cases, including 44,399 deaths, representing more than 40% of all cases reported across the African continent of 1.3 billion people.

As the numbers of cases and deaths have begun to drop, South Africa has now eased several restrictions, allowing alcohol sales to resume, reducing the nighttime curfew and allowing public parks and beaches to reopen.

Many African countries will get vaccines from the AU initiative, which has sourced 600 million doses through COVAX and acquired another 400 million from manufacturers including AstraZeneca, Pfizer and Johnson & Johnson, Ramaphosa said Monday night.

Neighboring Zimbabwe will be among the first countries to receive China’s COVID-19 vaccine, the country’s ambassador said Tuesday, as the southern African country reels from a deadly resurgence of the coronavirus.

“Zimbabwe will be one of the first 14 countries to receive vaccine aid from China very soon,” Ambassador Guo Shaochun tweeted, citing a statement from his country’s foreign affairs ministry. Neither statement said how many doses would be delivered, when they would arrive or whether they will be free of charge.

Other African countries to get China’s vaccine include Equatorial Guinea and Sierra Leone, according to the statement.

Zimbabwe has not yet ordered any vaccines. A top Zimbabwean official recently said the government had budgeted $100 million to buy around 20 million doses. That would be enough to inoculate about 60% of Zimbabwe’s 15 million people to achieve herd immunity, finance ministry permanent secretary George Guvamatanga told state media.

The vaccines would be acquired through the AU initiative, the Sunday Mail newspaper reported. The ministry is waiting for regulators to give authorization “before placing a concrete order,” Guvamatanga said.

There are fears that the new, more infectious variant of the virus arrived when scores of thousands of Zimbabweans living in South Africa returned home for the holiday season.

The country, whose once robust public health system has deteriorated along with the economy over the past two decades, has confirmed 33,548 cases, including 1,234 deaths.

Zimbabwe has extended a monthlong strict lockdown imposed at the beginning of January by two weeks.