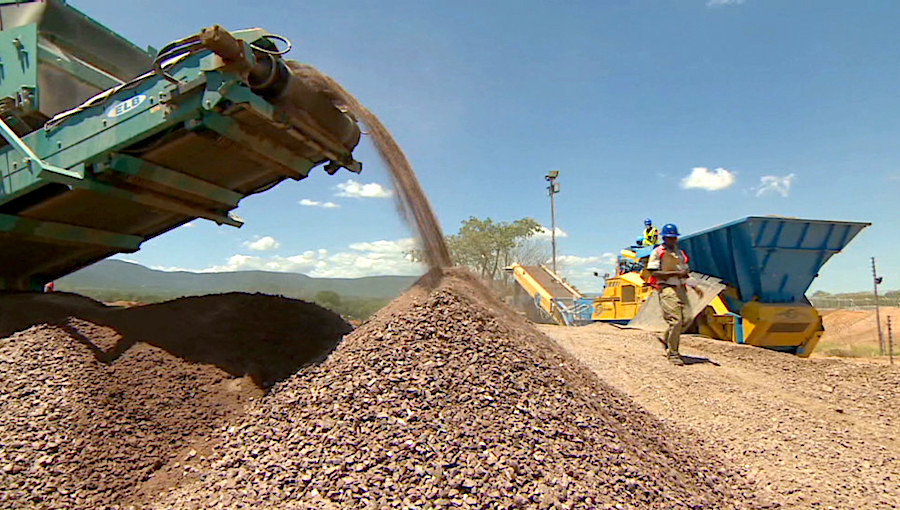 Most of the diamond fields are in Marange in eastern Zimbabwe, where production is dominated by ZCDC. (Image: Screenshot from CNN’s Marketplace Africa)

Russia’s Alrosa (MCX:ALRS), the world’s top diamond producer by output, has begun prospecting and preliminary exploration works for deposits in Zimbabwe, as part of a partnership with the country’s Consolidated Diamond Company (ZCDC).

The move is a welcome boost to the southern African nation’s attempts to expand diamond mining revenues. Zimbabwe first began allowing foreign companies to dig up precious stones in 2018, opening the door to private investors.

Mines minister Winston Chitando said at the time that his office was considering letting foreigners hold majority stakes in local operations on the condition that part of their output is reserved for domestic downstream industries.

“Following the signing of a joint venture agreement with Zimbabwe Consolidated Diamond Company to develop diamond deposits, we are progressing well towards the initiation of the full-scale prospecting works this year,” Alrosa’s deputy chief executive, Vladimir Marchenko, said in the statement.Alrosa opened an office in Zimbabwe’s capital Harare in 2018. First employees arrived early last year and the joint venture with ZCDC was formalized in December.

Most of Zimbabwe’s diamond fields are in Marange, in the eastern part of the country, where production is dominated by ZCDC.

In 2008, hundreds of artisanal miners were killed and thousands had to leave their homes as the military, under the former government of dictator Robert Mugabe, forced them to leave Marange.

International advocacy groups accused Mugabe of looting about $2 billion from the diamond-rich fields. The European Union lifted sanctions that curbed diamond exports from Zimbabwe at the end of 2013.

In early 2016, however, Mugabe evicted all diamond miners after they declined to merge with ZCDC.

President Emmerson Mnangagwa, who took office in 2018, has moved to end the country’s international isolation and attract foreign investment to boost an economy in tatters.

Campaign group and accountability watchdog Global Witness has said that Mnangagwa’s handling of the nation’s diamond industry would be the ultimate test for his commitment to economic reform and anti-corruption.

According to the organization, good governance of the country’s diamond sector is a barometer of the direction that Zimbabwe is taking more broadly in the post-Mugabe era.

“It will attest to the credence of President Mnangagwa’s claims of a zero tolerance approach to corruption and transformed economic governance,” Sophia Pickles, Campaign Leader at Global Witness, said.

Alrosa has committed to invest $12 million in Zimbabwe from 2020 to 2022. Most of the diamond fields are in Marange in eastern Zimbabwe, where production is dominated by ZCDC.