Amendments to Maintenance of Peace and Order Bill

Source: Amendments to Maintenance of Peace and Order Bill – The Zimbabwean 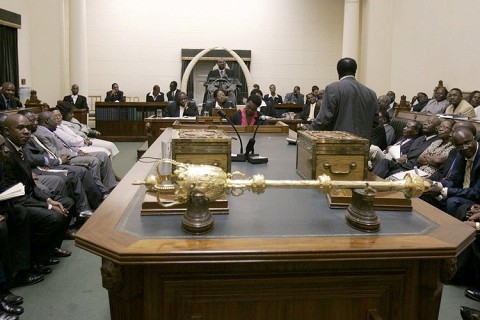 Amendments Made to the Maintenance of Peace and Order Bill

At a sitting that started on 8th August and ended at 4.10 am on 9th August the National Assembly passed the Maintenance of Peace and Order Bill with amendments, most of which were intended to meet objections raised by the Parliamentary Legal Committee [PLC] in its adverse report on the Bill.  [The adverse report was outlined and discussed in Bill Watch 39/2019 of the 29th July [link].] Following a summons by the President recalling the Senate from its current recess, the Senate is now due to consider the amended Bill on Wednesday 14th August, together with the Appropriation Supplementary (2019) Bill and the Finance (No. 2) Bill.

This bulletin analyses the amendments which the National Assembly made to the Maintenance of Peace and Order Bill.

Annotated Maintenance of Peace and Order Bill indicating how the amendments made fit into the text of the Bill [link].

The Amendments Made by the National Assembly

A preamble was inserted in the Bill setting out the provisions of section 86 of the Constitution, which allows laws to limit rights and freedoms guaranteed in the Declaration of Rights.  Presumably, the preamble is intended to justify and explain the limits the Bill will impose on freedoms to assemble, demonstrate and petition Parliament.

This clause will give regulating authorities (senior police officers) power to ban for up to three months the carrying of weapons in public.  The clause was amended:

While the amendments improve the clause, it is still too widely phrased.  Anyone who carries a banned weapon in public will be guilty of an offence and liable to imprisonment for six months, regardless of their justification for having the weapon.

This clause will require convenors of public gatherings to notify the police in advance of the gatherings;  if they fail to do so they will be guilty of an offence and liable to imprisonment for up to a year.  The PLC considered that imprisonment was too severe a punishment for the offence and that a fine would suffice.

The amendment passed by the Assembly does not meet the PLC’s objection because it will retain the punishment of imprisonment for failing to give notice of a gathering.  Moreover, it will create two further offences ‒ failing to notify the police if a gathering is postponed or if it is cancelled.

The amendment does not meet more general objections raised by the PLC, that clauses 5 to 8 of the Bill will unduly stifle freedom of assembly and association, and that clause 7, in particular, will prevent spontaneous gatherings being held.  Judgments of the Constitutional Courts of this country and South Africa have emphasised the importance of allowing spontaneous demonstrations;  the judgments are referred to in the Bill Watch mentioned at the beginning of this bulletin.

The amendment is also ineptly drafted.  It does not actually say that failing to give notice of a gathering will be a criminal offence, though by prescribing a heavy fine and imprisonment it obviously will be.  Also, the level of the fine to be imposed for the two new offences is not specified ‒ something that the Senate will have to rectify with a further amendment.

Clause 12: Civil liability of convenor of a gathering

This clause will impose civil liability on convenors for damage or injuries caused at public gatherings which have been held in contravention of the Bill.  The PLC said the clause was too broad and an invasion of freedom of assembly and association guaranteed by section 58 of the Constitution.

The amendments passed by the National Assembly will make the clause less oppressive ‒ but only very slightly.  They will make convenors responsible for loss or injury “caused by” the public gathering, not for loss or injury “arising of or occurring at” the gathering.  And they will allow co-convenors to avoid liability if they show they were not responsible for failing to give notice of the gathering.

The changes made to the clause are insignificant and it remains far too broad.

This clause will give police officers power to control disorder at gatherings and, in its original form, the clause would have given them the right to use firearms and other weapons as a last resort.  The National Assembly passed an amendment to the clause to remove the references to firearms and weapons.  This is a welcome and necessary change, one which was not suggested by the PLC.

This clause required every adult to carry his or her identity document in public and gave police officers power to demand that he or she produce it.  This, as the PLC rightly pointed out, was unconstitutional.

The clause has been amended so that it provides merely that if a person is reasonably suspected of having committed an offence the police can demand his or her identity document.  The person will then have to produce it within seven days at a police station. The clause is now constitutional.

The next five amendments were not suggested by the PLC and were made in the course of debate during the Committee Stage in the National Assembly.

This clause will allow the police to establish cordons round an area in order to contain public violence within the area or to prevent violence spreading to the area.  The effect of the amendment is that cordons may be established for those purposes if it is reasonably necessary to do so in the interests of, amongst other things, “public morality, public health or regional or town planning”.  What public morality, public health or town planning have to do with containing public violence is anyone’s guess.

Clause 19: Powers of search and seizure

This clause will allow a court convicting a person of an offence involving public security to order the forfeiture of any vehicle, aircraft or vessel involved in the offence.  The amendment will limit the court’s power to vehicles, aircraft or vessels used to commit the offence or to enable it to be committed.

This clause will give magistrates jurisdiction to impose very severe sentences for offences involving public security.  The National Assembly resolved to delete a subclause giving the President power to suspend the operation of the clause.  While deleting the subclause is a good idea, magistrates’ sentencing powers under the clause are still far too great and should only be exercised by the High Court.

The Assembly resolved to insert a new clause repealing POSA;  the Bill in its original form omitted to do this.

The Assembly voted to insert a provision that will allow “meetings of traditional leaders with their subjects” to be held without the need to give prior notice to the police.

Is the Bill Now Constitutional?

No it is not.  As pointed out above, the amendments have not met the PLC’s objection that clauses 5 to 8 unduly limit citizens’ constitutional right to demonstrate peacefully in public.  Clause 12 is equally repressive, by imposing excessive civil liability on convenors who fail to notify the police of forthcoming demonstrations.  The Bill still prohibits demonstrations near Parliament which, as the PLC said, unduly inhibits citizens from petitioning Parliament.

It is to be hoped that the Senate will make further amendments to protect the essential democratic freedoms of assembly and demonstration, and to render the Bill fully compliant with the Constitution.  Further amendments to that end could include the following: