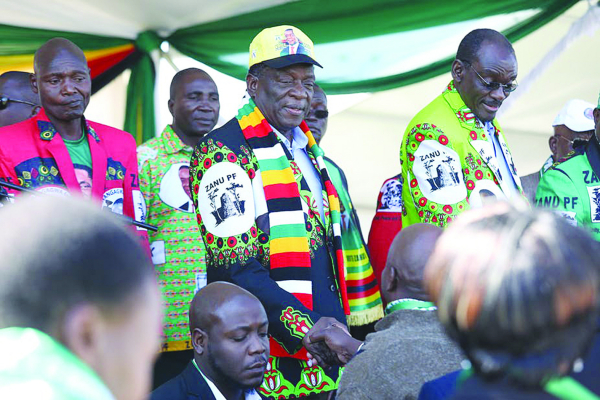 THIS country is founded on the principle of ubuntu, respect of the rule of law, freedom and democracy.

The Stone Age politics being exhibited in Zimbabwe by the ruling party is a cause for concern.

The entitlement mentality has killed the nation. We are stuck with certain characters who are not progressive and only think about themselves.

During the early 1980s, we saw this country move from white minority rule to black majority rule, shifting from the white-dominated economy to black empowerment, but things have taken a downward spiral.

Black empowerment was a very beautiful and brilliant ideology, with very positive consequences on our lives.

However, our mistake was lack of willpower and wisdom to push the country forward and we saw the late former President Robert Mugabe’s regime starting to loot the country’s resources to unprecedented levels and we lost all trust.

This, however, led to the formation of the labour-backed MDC opposition party, which had the resolve to fight the people’s struggle.

The formation of the strongest opposition party and its launching in 1999 was due to frustration of the majority who felt that the Zanu PF leadership was mismanaging the economy and marginalising others in the economic sphere.

We must admit that we have spent many years fighting each other while the economy bleeds to death.

We must actively seek to remedy the harm which has extensively damaged the country’s image.

It is sad that in the midst of the COVID-19 pandemic, some countries are busy planning for the future, while our government is arresting opposition supporters and activists and suspending holding of elections.

Anarchy will always create chaos in the country. It is so disturbing that some members of the opposition who call themselves agents of change have sold out the people’s struggle under the disguise of constitutionalism.

How are they going to address the people who are itching for real change in the country after the people have seen them going to bed with the ruling party? Will the people take them seriously?

Some say politics is a dirty game, but to others, politics has become a gateway to success.

Our political leaders, instead of “having a serious discussion” about how to improve the economy and governance, are always busy jostling and fighting for positions.

It is clear that all along, the majority of Zimbabweans have been sold a dummy by these people in suits who are masquerading as politicians.

Last week’s events showed that we are still very far from democracy.

We have seen choking and suffocating of democracy.

The recent announcement by the Zimbabwe Electoral Commission (Zec) about suspending all electoral activities in a bid to give Thokozani Khupe the greenlight to appoint her legislators without going through by-elections is a sham. Her candidates were going to be humiliated.

In his statement, Zec chief elections officer Utoile Silaigwana said the suspension was due to the COVID-19 pandemic and was in the interest of the safety of all the people. Is this supported by the Constitution?

We have witnessed the lack of respect for rule of law and constitutional rights: partisan deployment of security forces, arrests, disrespect of property rights, half-baked and partial investigations, corruption and threats against journalists.

It seems to me that real politicians are there in Zimbabwe, but are denied a chance to exercise or exhibit their capabilities.

Systematic nepotism, corruption, poor governance, mediocrity and police brutality are the order of the day.

This government is behaving like Al-Shabab while the economy is in the doldrums.

The most successful Zimbabwean leader will be the one who will understand the dynamics of modern governance, not this Idi Amin type of governance.

Zimbabwe is a raw diamond waiting to be polished and sell itself to the highest bidder.

The country is endowed with vast mineral deposits, but Zanu PF is taking it back to the Stone Age era. Action should be taken now.