President Emmerson Mnangagwa set social media on fire Friday after he posted a photo of himself watching television with a clenched fist while supporting the Zimbabwe Warriors, which were playing against the Flames of Malawi in a Group B match of the Africa Cup of Nations at Kouekong Stadium in Bafoussam, Cameroon. 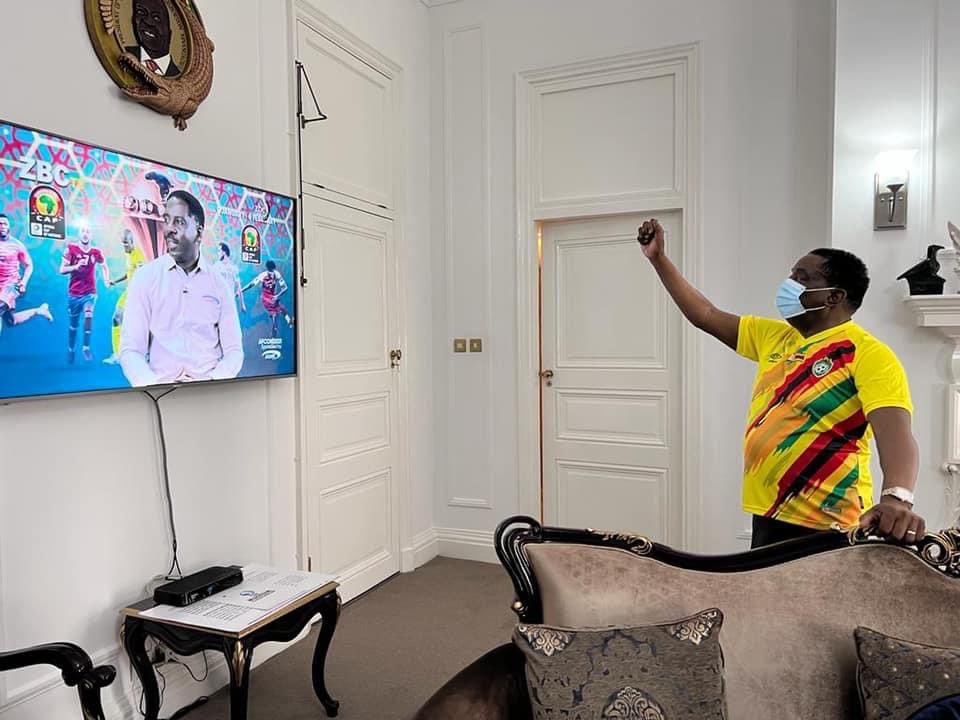 The tweet generated more than 700 comments, over 600 retweets and 2,400 likes with some people expressing dismay over what they thought was his attempt to allegedly steal the thunder from the underperforming Warriors.

The Zimbabwe Warriors bit the dust in the game after dominating in the first half of the match.

A large number of people claimed that Mnangagwa was part of the problem but others thanked him for supporting the national soccer squad.

One of the respondents of the tweet was Zim New Parrot, who had no kind words for the president. “Chief stop supporting the national team,” said Zim New Parrot, adding that ”… Would rather pay you for that. Everything you touch doesn’t succeed. Thanks.”

Another one identified only as Priscilla expressed anger over what is generally happening in Zimbabwe.

Priscilla said, “Warriors are struggling, civil servants are suffering, the infrastructure is dead, looting of natural resources is at its highest level! Zimbabwe is on its knees! Nothing to cheer on here!”

The Fangs could not be left out of the attack. “Anything you touch turns to dust imi vanhu veZanu… Chimbomira izvozvo… (You Zanu PF people stay out of this).”

The Zimbabwe Institution of Accountability noted that Zimbabwe shoud “build stadiums & other proper football facilities. Taking chances with a failed local league and stadia that is not Fifa compliant. … An epic fail like everything else in this god forsaken country.”

But a few came to the defence of the Zimbabwean president, who is currently on leave.

One of them is Elias Goromondo, who said, “Mr President you are God given!! We thank you for your policies! We love you and are prepared to die for you.”

Boss Kedha echoed the same sentiments saying, “@ZanuPFOfficial makes you smart, wise and presentable. We have no time to waste, We innovate, We empower We deliver and We are the Best. Join the winning side and be delivered from the demon of selling out!!!”

The Zimbabwe Warriors, who play Guinea next week, are almost out of the premier African soccer tournament.

Find below some of the comments posted on Mnangagwa’s twitter thread on the Warriors game against Malawi.

Why are yu did this , u know yo hands is cursed. Chaunobata chese chinosara chichitofa.

Mr President we have no electricity in our neighborhood, this will be my second match with no Zesa. Please give us zesa for the match only!

Deal with Bhalagwe. Otherwise you just give bad luck to the team. Too much innocent blood on those hands.

Just step down, your wishes are so useless Manangwaga….!

Sanctions are real, even at AFCON they are following us, mmmm even RTGS the Strongest Currency in the region is stressing us.

I just want to know if their salaries have been paid. We have been bad on honoring these guys…

Charity begins at home. We need to fix infrastructure, development of grassroots football then we can dream. Hakuna rigging uku.