Another high-powered Chinese delegation jets in 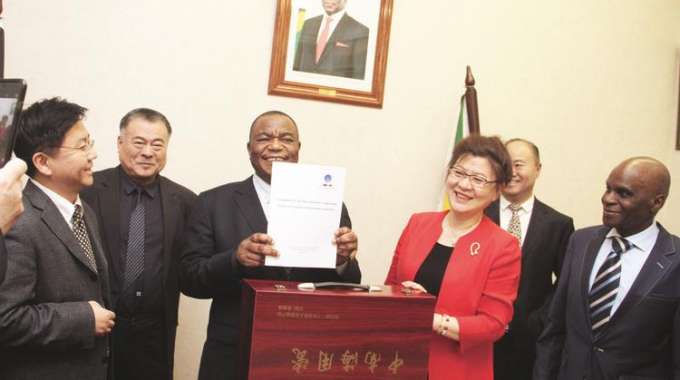 Source: Another high-powered Chinese delegation jets in | The Herald April 23, 2018

Vice President General Constantino Chiwenga (Retired) receives a Sino-Zimbabwe Report from head of delegation and International Cooperation of the National Development and Reform Committee of China deputy director Madam Song Gongmei,while Deputy chief Secretary in the Office of the President and Cabinet Mr Justin Mupamhanga (far right) and other members of the delegation look on in Harare yesterday. —(Picture by Tawanda Mudimu)

Tendai Mugabe Senior Reporter
The implementation of mega deals signed between Zimbabwe and China during President Mnangagwa’s recent visit to Beijing, China, received a boost yesterday with the arrival of a high-powered delegation from China’s National Reform and Development Commission to train locals in the requisite skills to execute them.

The team is led by Madam Song Gongmei, who is the deputy director-general of the International Centre of the National Reform and Development Commission.

Yesterday, the team met Vice President Constantino Chiwenga at his Munhumutapa offices in Harare before later signing an agreement with the Chief Secretary to the President and Cabinet Dr Misheck Sibanda on the skills capacitation programme.

Speaking to journalists after the signing ceremony, Dr Sibanda said: “We have just received a high-powered delegation from the People’s Republic of China from an institution called the National Reform and Development Commission of China which is a think tank responsible for the dynamic and far reaching reforms in China since 40 years ago.

“They have come to us following an earlier agreement we signed with them in 2015 as we were conceptualising the establishment of special economic zones and other areas which could fast track our development programmes. They are coming now on the heels of His Excellency President Mnangagwa’s successful State visit to China. They have been mandated by their Government to follow up and try to actualise those deals that have been signed by proffering the necessary capacitation in terms of skills. That is the essence of the agreement we signed. They will be training us in various areas so that we move forward in in terms of implementation and that is why you saw quite a number of colleagues from ministries and officials from State enterprises.”

Dr Sibanda said it was no longer business as usual in Government as efforts were being intensified to achieve the President’s vision to make Zimbabwe a middle income economy by 2030.

“As said by the President, it’s business unusual. We managed to call people on a Sunday for this occasion. That signifies the importance of this phase in terms of fast-tracking our development to achieve the goals of middle income vision as enunciated by His Excellency the President.”

He also signed more agreements on food assistance, the supply of high performance computers Phase 2, availability of experts from China in various fields and the drilling of an additional 500 boreholes to Zimbabwe.

A similar number have already been drilled with assistance from China.

Foreign Affairs and International Trade Minister General Sibusiso Moyo (Retired) signed a Memorandum of Understanding on human resources development on behalf of the Public Service Commission in the presence of President Mnangagwa and his host President Xi Jinping.

Environment, Water and Climate Minister Oppah Muchinguri-Kashiri signed an MOU for the construction of Kunzvi Dam while Ministry of Local Government principal director Colonel Joseph Mhakayakora (Retired) also signed an MOU on the rehabilitation and expansion of Harare waterworks.