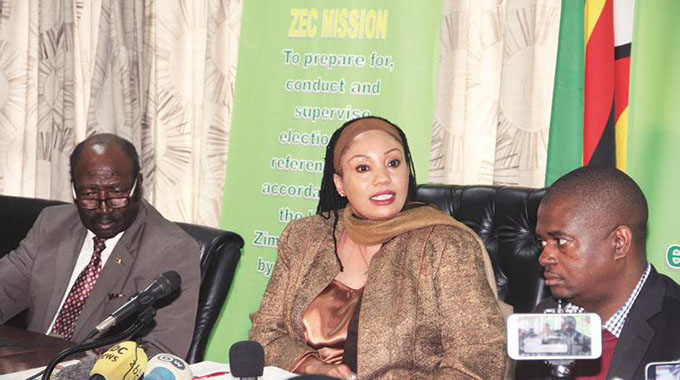 Nyemudzai Kakore Herald Correspondent
Printing of the ballot paper is the constitutional prerogative of the Zimbabwe Electoral Commission (ZEC) and any political party which feels aggrieved by the law and wants to appeal to the African Union (AU) and SADC is free to do so.

Addressing her weekly media briefing yesterday, ZEC chairwoman Justice Priscilla Chigumba said the electoral body went beyond its constitutional mandate by inviting all political parties to observe the printing of the ballot paper.

She said in other jurisdictions, stakeholders were allowed to “touch the ballot or feel it” because they had a legislative framework for that.

On the transportation of the ballot papers, Justice Chigumba said it would not be done by the military, but the printers.
“The strict letter of the law is that we have the exclusive constitutional mandate to procure ballot paper, to design it, to print it and to distribute it.

“The reason why we keep having these disputes around these areas is that the law does not provide that members of the public or stakeholders be involved in this process. Our law says only ZEC can do that. We respect the democratic right of each and every Zimbabwean to approach any fora that they feel will give them the relief that they seek,” she said.

“We will not be releasing pictures of voters to the public and this is because the right to access to information is not absolute. It must be juggled with the right to privacy. The format in which we have released the voters’ roll, and the information that we have given on the voters’ roll, is sufficient to fulfil our constitutional mandate that we must provide a final voters’ roll which is analysable and which is searchable,” said Justice Chigumba.

“We are aware of our constitutional duty to be transparent, to provide a final voters’ roll which is analysable and searchable. It is our considered view that we have done so and that we have complied with the law without necessarily impinging on the rights of others. Rights are not absolute; they are subject to control in a democratic society,” she said.

“Would you like your picture and your fingerprint, your name and your identification card number, your telephone, address number to be flighted around somewhere in the public arena? We have a duty to actually protect our registered voters from identity thefts and all sorts of things, we balance conflicting interests,” she said.

“What we later heard from the parties is that they actually wanted to be involved in the process of touching, getting to the printing press, things that are not allowed in terms of the law. We also want to remind the people of Zimbabwe that the prerogative of the printing of the ballot lies with the commission. The process of allowing parties to go in and observe was a way of trying to find consensus and common ground with political parties so that we can minimise conflict and we did our duty. We can’t go beyond that, that will be unlawful.”

Justice Chigumba and Dr Moyo were responding to threats by MDC Alliance candidate Mr Nelson Chamisa that they would demonstrate to force ZEC to produce a new set of ballot papers in the presence of all key stakeholders and that they will dispatch a team to AU and SADC to press their demands.

Justice Chigumba said the commission had established 10 985 polling stations throughout the country whose locations were published in yesterday’s press.

“The law compels the commission to establish adequate polling stations in each of the country’s 1 958 wards with each polling station being located at a place that is readily accessible to the public, including persons with physical disabilities,” she said.

“We are just a few weeks away from July 30, 2018. We would like Zimbabweans to know that the Zimbabwe Electoral Commission is conducting final preparations to ensure that the 2018 harmonised elections are successful,” she said.
“We have finished the decryption of the remaining registrants who registered before the voters’ roll inspection period was completed and these entries are now on the final voters’ roll which has a total of 5 695 706 voters.”

To date, Justice Chigumba said, ZEC had accredited 830 election observers. Of these, 15 (check check figure) are foreign while the rest are local.

“The commission is taking steps to ensure that the elections will be conducted peacefully in an environment that ensures that the will of the electorate prevails. It is satisfied that its preparations are well on course and is ready to discharge its mandate in accordance with the law,” she said.

“With regards to this week’s activities, we would like to report that we recruited about 130 000 officers required for the polling exercise. The commission has already recruited 210 constituency election officers and their deputies. Their training was conducted from 2 to 4 July 2018 and they are already in the field.

Justice Chigumba added that they would investigate cases where reports have been circulating that registered voters had been receiving messages on their mobile phones to vote for certain political party or individuals.