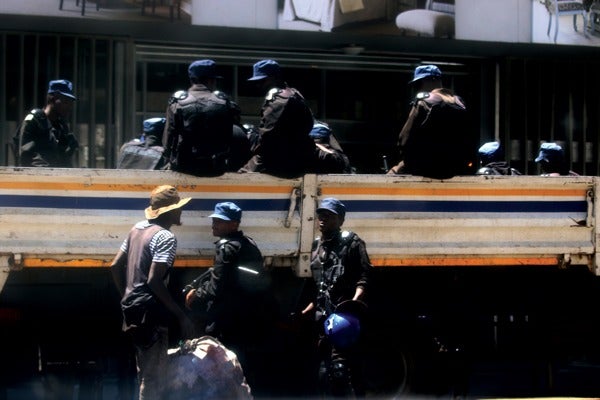 Parliament yesterday heard that soldiers and police officers’ morale had hit rock bottom due to a shortage of food and uniforms, with a meagre 39 cents being spent on each soldier’s daily diet, causing some to faint during parades due to hunger.

Defence and War Veterans secretary Mark Grey Marongwe made the disclosure when he appeared before the Levi Mayihlome-led Parliamentary Portfolio Committee on Defence and Home Affairs.

Speaking on behalf of the police, Senior Assistant Commissioner Wonder Tembo also revealed that the paltry budgetary allocations for the Zimbabwe Republic Police had resulted in the country’s cops wearing fading uniforms, thus dampening their spirits.

The Defence ministry was allocated $1,43 billion after submitting bids for $24,8 billion in the 2020 budget to support the Zimbabwe National Army, the Air Force, war veterans and general administration expenses.

“Feeding and kitting of our army was achieved, although not at the intended levels and this is just the tip of the iceberg,” Marongwe said. “At one time, the calculations we made in relation to feeding figures showed that it had deteriorated to a mere $0,39 cents to feed one soldier during the middle of 2019.”

Marongwe disclosed that due to poor dietary conditions, it was evident whenever they sent officers on attachment to other countries that they returned showing signs of having gained weight and being well-fed, in contrast to local conditions

“Our Defence Forces participated in the Russian military games and despite the challenges they face, they were rated among the best. They were out there for nearly a month and their commander said when he went to see his troops he could not recognise them because they were now fat compared to their own country,” Marongwe said.

He said conditions at army barracks were bad for the young recruits due to inadequate funding, resulting in some training without the required clothing.

“The ZDF abroad was last paid their allowances in February and we have a situation where some who finished their courses were unable to return home because they borrowed money from their counterparts from other countries and without paying it back, they cannot come back home,” he said.

Marongwe said of the 51 items that each soldier is supposed to get in the ZDF, they were only getting nine items due to budgetary constraints.

Army chief of staff and administration Major-General Paul Chima added: “When you have one uniform and you wash it, it is either you wait for it to dry or you put it on wet. We need adequate supplies. If you want to check on that they are under nourished you can easily observe that in the training camps.

Chima also disclosed that at times, soldiers have to skip breakfast, but have lunch with beans and the same diet for dinner when their required diet must include eggs, bacon and sausages, rice and other foods which soldiers elsewhere get.

On artillery, he said Zimbabwe’s soldiers were still using the AK-47 assault rifles, which was commonly used during the war of liberation, when internationally, army artillery has changed due to changing technologies.

Air Vice-Marshall Jacob Nzvede also painted the same sorry picture of shortages of accommodation, and artillery for pilots as well as lack of equipment.

Said Mayihlome: “Morale is low and if possible, the Finance minister, Mthuli Ncube, should be asked to appear before this committee because without security this country is doomed.”

Tembo, who represented the police, also painted a gloomy picture on the state of affairs at police camps while addressing the Parliamentary Portfolio Committee on Defence and Home Affairs and the Thematic Committee on Peace and Security.

He disclosed that some police officers stationed at border posts were last paid travel and subsistence allowances in 2005, a situation which could fuel corruption at the country’s porous borders.

“If you look at the uniforms of the police officers, you will notice that they are supposed to be grey shirts, but they are now turning greyish white because we end up giving police officers only one shirt,” Tembo said.

“There is need for adequate funding to buy uniforms for the 50 000 police officers, their bedding and linen as well as their rations,” he said.

He said the police need new ICT technology as they were operating in an ever-changing environment and are expected to operate using new gadgets like their counterparts in the region.

“On public relations and adverts, as an organisation, we deal with the public and we want to reach our public through agricultural shows and the Zimbabwe International Trade Fair. As an organisation, we also buy newspapers for assistant commissioners and above so that they understand what is going on in the country and we request for funding for newspapers so that we hear all news from various newspapers.”

On stationery and equipment, he said some police stations, especially those in the rural areas, were using archaic typewriters or taking statements on pieces of paper.

“We have three hospitals that take care of our police officers and dependants. There is need for new equipment and medicines and everything that ensures that hospitals operate. On accommodation, some of our police officers end up lodging with criminals and it is not good. We last gave T and S (travel and subsistence) to police at border posts in 2005 and we are inviting corruption,” he said.