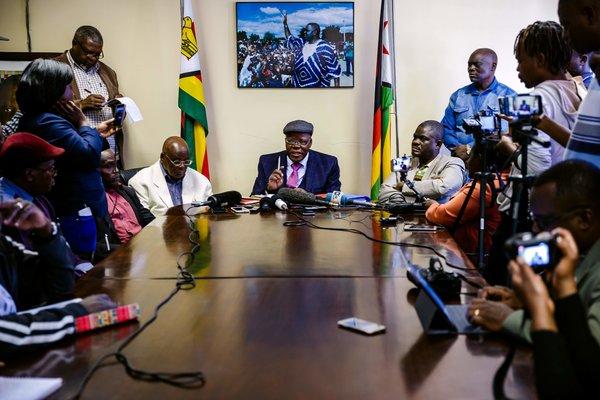 Tendai Biti had sought asylum in Zambia after accusing Zimbabwean officials of manipulating the results of the presidential election.

HARARE, Zimbabwe — A senior leader of Zimbabwe’s main opposition party was arrested on Thursday after Zambia rejected his request for asylum and deported him, escalating fears of a government crackdown following a disputed presidential election.

The politician, Tendai Biti, was handed to the Zimbabwean authorities at the border. He was later taken before a magistrate in Zimbabwe’s capital, Harare, and charged with inciting public violence and with violating election law by announcing unofficial results.

The magistrate, Francis Mapfumo, released Mr. Biti on $5,000 bail, and ordered him to return to court on Friday. The bail conditions also required Mr. Biti to surrender the title deeds to one of his Harare homes and to leave his passport with the clerk of court.

The events come as Mr. Biti’s party, the Movement for Democratic Change, prepares a legal challenge to the results of the July 30 election, which President Emmerson Mnangagwa won narrowly.

Supporters of the Movement for Democratic Change began holding angry protests after Mr. Biti and the party’s leader, Nelson Chamisa, proclaimed victory and accused election officials of manipulating the results, though they did not offer any evidence.

Mr. Biti also accused the governing party of plotting to assassinate him and Mr. Chamisa — again without producing evidence. The military later dispersed the protests by force, killing six people.

The authorities say it is against the law to declare the winner of an election before the Zimbabwe Electoral Commission has announced the official results. Fearing arrest, Mr. Biti, who was charged with treason in a crackdown on opposition officials after the 2008 election, fled to Zambia.

In denying Mr. Biti’s request for asylum, the Zambian authorities said that they saw no merit in Mr. Biti’s argument that his life was in danger.

Mr. Biti has also previously been critical of the Zambian government, accusing it of following closely in the footsteps of Zimbabwe’s. “The rule of law in Zimbabwe has long been considered broken,” he wrote in an article published last year by The Daily Maverick, a South African website. “The same can now be said of our neighbor.”

“You must remember that Biti was tortured in the 2008 elections,” Mr. Coltart said, adding, “Biti called for peaceful demonstrations. He did not call for violent protests.”

The United Nations refugee agency said it was “gravely concerned” about the reports of Mr. Biti’s forced return to Zimbabwe and urged the Zambian authorities to investigate.

“Forcibly returning refugees and asylum seekers to their country of origin is a serious violation of international refugee law,” the agency said.

A joint statement by the heads of missions in Zimbabwe of the European Union, Australia, Canada and the United States pressed the Zimbabwean authorities to guarantee Mr. Biti’s safety and respect his rights. It also said the diplomats were “deeply disturbed” by reports that opposition supporters were being targeted by Zimbabwean security forces.

The turmoil is reminiscent of disputed elections during the rule of Robert Mugabe, who was ousted last November after nearly four decades in power.

He was replaced by Mr. Mnangagwa, his former intelligence and defense chief, who pledged to hold free and fair elections.