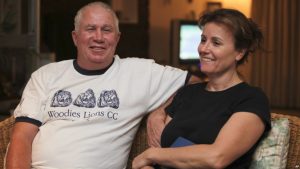 An autopsy shows a key Zimbabwe opposition leader suffered skull and rib fractures in a fiery helicopter crash that killed him, his wife and three others in northern New Mexico earlier this year.

FILE – This Oct. 16, 2009 file photo shows Senior Zimbabwean MDC opposition official Roy Bennett, left, and his wife Heather, relax at a friends home in Mutare about 200 km east of Harare, following his release from prison. A fiery helicopter crash killed Bennett and his wife, while on holiday in a remote part of the U.S. state of New Mexico and four others aboard, friends and authorities said. (AP Photo/Tsvangirayi Mukwazhi,File)

ALBUQUERQUE, N.M. (AP) — An autopsy shows a key Zimbabwe opposition leader suffered skull and rib fractures in a fiery helicopter crash that killed him, his wife and three others in New Mexico earlier this year.

State medical investigators released autopsies for Roy Bennett and his wife, Heather, on Friday, nearly six months after they died in the wreck outside Raton as they were traveling to a friend’s property in the area.

The autopsy for Heather Bennett showed she suffered head and chest injuries, as well as burns that covered most of her body.

Autopsies for the other crash victims killed were released last month.

The Bennetts’ deaths were met with an outpouring of grief in Zimbabwe after the crash. A white man who spoke fluent Shona, Bennett had won a devoted following among Zimbabweans for passionately advocating political change.