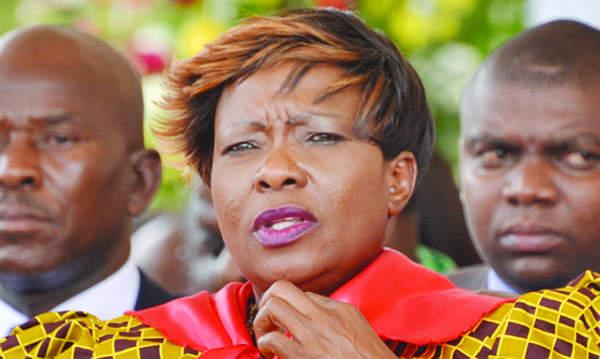 Auxillia was Mupfumira’s deputy all along having been appointed to the post by the late former President Robert Mugabe.

Mupfumira is currently battling a corruption charge in the courts involving US$90 000 National Social Security funds.

Early this year, Mnangagwa awarded Auxillia the Order of the Star of Zimbabwe gold medal for her “outstanding performance” in philanthropic activities, among 99 other outstanding institutions, civilians and gallant fighters of the liberation struggle.

Political analyst Fidelis Duri said her elevation was aimed at facilitating her political rise to consolidate Mnangagwa’s power base, copying from Mugabe’s template.

He argued that Auxillia was elevated during a politburo reshuffle announced on Wednesday to subdue Vice-President Constantino Chiwenga, a leading contender in the behind-the-scenes battle to succeed Mnangagwa.

“This is purely history repeating itself. We have seen this before,” Duri said.

“We raised eyebrows when Mugabe appointed his wife Grace to key posts in the party before he sacked his deputy, now President. Mnangagwa is giving his wife an influential position. There is no doubt that the appointment was supported by Mnangagwa’s cronies who wanted him to remain in power so that they are rewarded somehow.  The appointment points to the state of factionalism which has now become deep rooted in the ruling party.”

In 2014, Grace was given a doctorate in sociology by the University of Zimbabwe just two months after registering at the institution.

Once a quiet figure known for her shopping and charity work, she became more high-profile in Zanu PF as the head of the women’s league and was instrumental in the ousting of several potential successors to her husband.

Another political analyst Rashweat Mukundu concurred, saying the politburo reshuffle and new appointments were aimed at disrupting plots by his rivals within the party.

“There is no doubt that the latest politburo moves by Mnangagwa are partly intended to disrupt his rivals in the party and also consolidate power by bringing in those close to him.  Roping in the wife who we have no history in terms of her ranking in the party is a clear indication of a man wanting sympathy and support, and seeking to neutralise his opponents. This is akin to Mugabe’s last days as Mnangagwa is increasingly showing frustration with his failure to take a stronger grip of the party.

“As it was in the days of Mugabe, it looks like it will be the same in Mnangagwa’s days. Will he succeed where Mugabe failed? I doubt it. History is simply repeating itself because Mnangagwa has not sought to reform the party and country, but rather to implement the worst version of Mugabe’s power template.”

“#FamilyAffair. It is a husband and wife team handling information in government and Zanu PF. And @edmnangagwa so!” he tweeted.

Political analyst Vivid Gwede said: “This is also a way of rewarding and returning Mutsvangwa from a political Siberia he had now seemed to be confined to. The other way of looking at it is that there is not much to write home about since there are many communicators within Zanu PF at many levels.”

But Zanu PF information director Tafadzwa Mugwadi said there was nothing amiss about the appointments.

“The appointing authority is an astute leader and he has no desire whatsoever to create a family dynasty and it should be noted with no ambiguity that Cde Mutsvangwa does not by any means belong to the Mnangagwa family. He is a deserving individual. Moyo was a cheerleader of the Mugabe dynasty and now he wants to make a comparison of the two.”