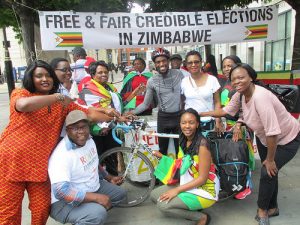 Nelson Chamisa has threatened that his MDC party will ‘not allow’ the elections on 30th July unless electoral reforms are made. The party has called for a demonstration in Harare on Tuesday to insist that reforms are implemented.

MDC T wants to know who is printing the ballot papers, who will have custody of them and how many have been printed, as well as their chemical composition. It also wants the scrapping of polling stations it says were illegally gazetted, and protested that the Zimbabwe Electoral Commission had hindered access to the new biometric voters’ roll.

MDC T spokesperson Tabitha Khumalo said it appeared that the voters’ roll still had a suspicious number of centenarians on it. She said the party had been forced into a corner by President Mnangagwa’s ‘intransigence and goal-shifting’.

Mnangagwa has promised free and fair elections but there is widespread suspicion in opposition ranks that Zanu PF will once again rig the poll, following its refusal to allow the diaspora a vote. For his part, Mnangagwa has dismissed the opposition as ‘barking puppies’.

In another development, the corruption watchdog Transparency International Zimbabwe says that, despite Mnangagwa’s promises, the government seemed to lack the political will to effectively tackle corruption. It estimates that between 30% and 50% of the country’s gross domestic product is misappropriated, especially in the public sector (see: https://www.theindependent.co.zw/2018/06/01/zim-lacks-political-will-fight-corruption/).

The Daily News reports that most of the officials arrested on graft allegations have been released on ‘relaxed bail conditions’, with some having their passports returned. They include permanent secretaries accused of corruption. The paper quotes Professor Stephen Chan of London’s School of Oriental and African Studies as saying ‘In Zimbabwe, the ruling elite is a tight group, bound by party ties, kinship ties, and liberation ties. Everyone knows how to steal and everyone knows someone who will know how to turn the heat down if they are caught.’ (See: https://www.dailynews.co.zw/articles/2018/05/30/mnangagwa-s-anti-graft-blitz-loses-steam?src=ilaw).

As users of social media may have noticed, top Zanu PF leaders including Mnangagwa and Vice-President General Chiwenga appear high on a list of 25 people alleged to be the most corrupt public figures in Zimbabwe (see: https://www.facebook.com/Mafirakurewa1/posts/1021859761313412).

Suspicion that there has been little real change since the ‘new’ regime took over seems to have been confirmed by the fiasco of the dodgy secondhand Boeing airliners bought by the government from Malaysia. The first one arrived in Zimbabwe last month for the bogus new Zimbabwe airline created because Air Zimbabwe is bankrupt. But the plane has already been returned to Malaysia without making a single commercial flight – perhaps because there were no Zimbabwean pilots trained to fly it or ground crews to service it . . . (see: https://www.iol.co.za/news/africa/zims-new-big-boeing-fails-to-get-off-ground-15261033).