Walter Nyamukondiwa Mashonaland West Bureau
Government will review the Battlefields mining disaster with a view to effect a shift in mining policy and the implementation of a raft of measures to engender safety and the formalisation of artisanal mining operations, a Cabinet minister has said.

This comes as rescue efforts have led to eight people being rescued alive while 24 bodies have so far been retrieved from shafts.

In an interview during his visit to Cricket No. 3 and Jongwe Mining Cooperative mines in Mhondoro-Ngezi, Mines and Mining Development Minister Winston Chitando said the review process will begin after scrutinising findings of the Battlefields disaster.

“We are going to review mining practices and unfortunately about two weeks back the Environmental Management Agency visited the site and made certain recommendations and observations which unfortunately were not enforced,” he said.

“Obviously it is a learning point and we will as Government have a serious review of this incident and come up with a policy position.”

Observations by EMA recommended upgrading of safety aspects of the shaft which had not been implemented when the shafts were flooded by water.

Among measures to be considered is the formalisation of artisanal mining activities.

“Formalisation will assist in the sense that it will enable Government to focus on formalised activities rather than haphazard operations.

“This is one of the issues that when we have the review will be one of the action points,” he said.

There are about 500 000 informal miners across the country and there have been growing incidents of injuries and deaths owing to failure to observe safety issues. 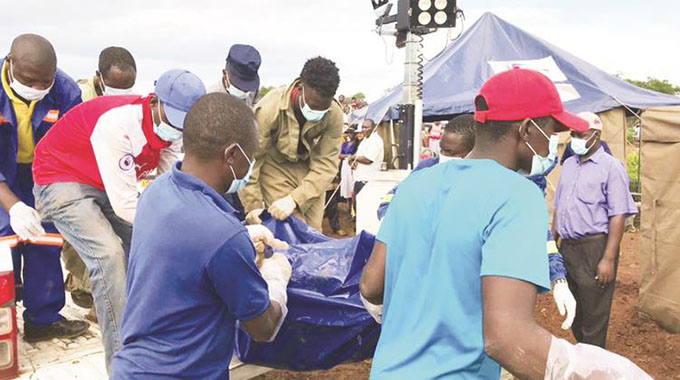 24 bodies were recovered in mining shafts at Cricket No 3 and Jongwe Mining Cooperative mines in Mhondoro-Ngezi (Mash West), while eight gold miners were rescued yesterday. – (Pic by Munyaradzi Chamalimba)

Minister Chitando said Government will wait for the review process as provided for by legislation before taking a position.

This also includes reviewing the role of those who failed to implement the EMA recommendations.

“We need to come up with a clear position on the way forward including a proper brief. When we have an incident of this nature there is a process which is provided for by legislation to review what has happened and make people accountable,” he said.

This comes as Environment, Tourism and Hospitality Industry Minister Priscah Mupfumira announced a donation of $10 000 from EMA to assist the bereaved families.

At least 23 bodies have been positively identified and the relatives have since collected them for burial with the Government and funeral service providers such as Doves, FCG and Nyaradzo providing assitance.