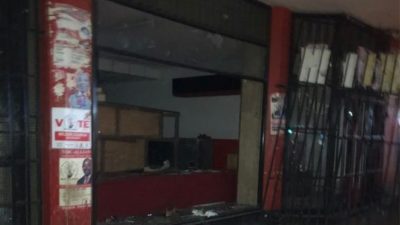 It’s unclear who was behind the attack on MDC headquarters in the capital, Harare

The main office of Zimbabwe’s opposition party, MDC, has been torched following protests sparked by the more than doubling of the fuel price.

Photos taken at the scene show security gates torn down, windows smashed and burnt debris on the floor.

Several people have been killed and hundreds arrested following protests in the capital, Harare, and Bulawayo.

Social media platforms have been blocked and businesses have closed as police patrol the streets.

The government has blamed the opposition and political rights groups for Monday’s violence.

It is not clear why the opposition’s headquarters would have been targeted.

Security Minister Owen Ncube confirmed there had been deaths but did not give an exact death toll.

He blamed opposition figures and political rights groups for the violence and said an investigation was under way.

President Emmerson Mnangagwa – who is trying to revive Zimbabwe’s struggling economy – said the fuel price rise was aimed at tackling shortages caused by an increase in fuel use and “rampant” illegal trading.

Protesters accuse the president of not understanding their situation.

For a second day residents in the suburb of Epworth in the capital are back on the streets and businesses remain shut in the capital and Bulawayo, the BBC’s Shinagi Nyoka in Harare reports.

Tear gas was also launched from a military helicopter at protesters who had put up barricades in the capital, the Associated Press agency reports.

Witnesses also reported violence in the eastern city of Mutare, where people attacked passenger buses and destroyed some shops, it adds.

Their own government had told them as much, warning that – after the failures of the Mugabe era – the economy was in crisis, the state was broke, and tough reforms would now be required.

But in the space of a few chaotic months, Zimbabwe’s new leaders seem to have squandered any public trust or goodwill.

The clumsy handling of a currency crisis has left most people struggling to afford basic goods.

Fuel shortages, the imposition of new taxes, and a sudden, extravagant fuel price hike, have cause more genuine hardship.

The president and his ministers have not helped matters by chartering jets, and buying new cars, while urging the public to travel by bicycle to save money.

It’s a sharp contrast to a decade ago, when a unity government dragged Zimbabwe out of a similar crisis and ministers took drastic pay cuts.

Today the authorities are accusing the opposition and human rights groups of orchestrating the violence. It is beginning to look and sound very much like the old Zimbabwe.

Zimbabwe is experiencing high inflation while wages have stagnated.

The southern African nation faces a severe shortage of US dollar cash and confidence in its bond notes, which are supposed to be worth the same as the dollar, is low. 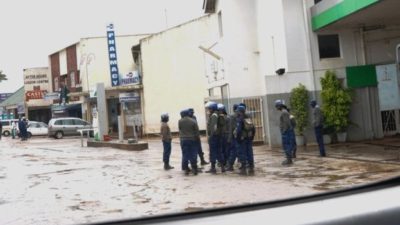 Police are patrolling the empty streets on the capital (Bongani Kumbula)

The bond notes, or “bollars”, have lost value because of a lack of foreign currency backing the note, and are now worth much less than a dollar.

Zimbabwean companies are also not producing enough to satisfy local demand or to earn foreign currency by exporting goods. Instead, the country is importing more than it is exporting and struggling to pay. 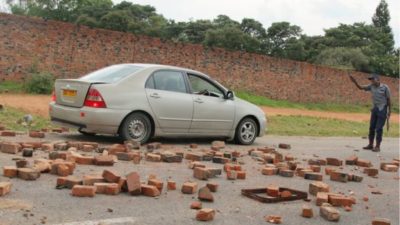 Roads were blocked in Harare on Monday (Reuters)

In a televised address on Saturday, President Mnangagwa said the fuel price hike would address the ongoing fuel problems, which have seen motorists queuing for hours at petrol stations.

He said the government would crackdown on “elements bent on taking advantage of the current fuel shortages to cause and sponsor unrest and instability in the country”.

The new prices mean Zimbabwe now has the most expensive fuel in the world, according to GlobalPetrolPrices.com

“People are protesting now that things are hurting. People are suffering,” a resident of Epworth told our reporter.

‘Where is the president?’

He added that the government does not seem to have solutions to their problems and called on it to step down.

Many protesters said the president – who left the country on Sunday for a trip to Russia and several central Asian countries – should have cancelled his trip to deal with the crisis. 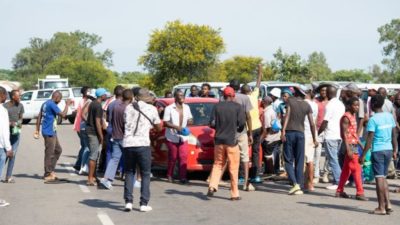 “We want Mnangagwa to know our displeasure in his failure,” an angry Mthandazo Moyo in Bulawayo told news agency AFP.

“[Former President] Mugabe was evil but he listened,” he added.

Nelson Chamisa, the leader of the main opposition Movement for Democratic Change said: “We have a national crisis which is descending into a humanitarian crisis.”

He won a controversial poll last year that was marred by violence and claims of election rigging.