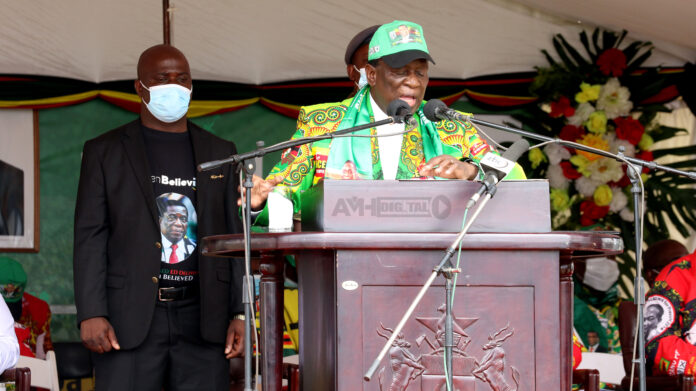 PRESIDENT Emmerson Mnangagwa yesterday warned chiefs against supporting the opposition, saying traditional leaders must remain loyal to the ruling Zanu PF party if they want to retain their positions.

Addressing thousands of ruling party supporters in St Mary’s, Chitungwiza, Mnangagwa warned that the party would not hesitate to dethrone chiefs found hobnobbing with opposition officials.

“We liberated the country through war. Some men and women perished. We said we would work with chiefs and when you see a chief supporting the opposition, that chief should do a cleansing ceremony and ask his ancestors why they would have forsaken him,” Mnangagwa said.

In December, Vice-President Constantino Chiwenga read the riot act to Chief Murinye of Masvingo after the traditional leader warned Mnangagwa that he risked losing the 2023 presidential race if he continued surrounding himself with corrupt lieutenants.

In his address yesterday, Mnangagwa threatened to block development in opposition-led local authorities if the electorate votes for Nelson Chamisa’s Citizens Coalition for Change (CCC) councillors.

“If you want the government to listen to your concerns and address them, you will have to send them via channels which we recognise and not through the opposition,” Mnangagwa
said.

“Here is the opportunity to vote for people who submit your concerns to the leaders. You hear the young boy (Chamisa) saying if I win, he will make this country ungovernable. Let us make sure he won’t get into government.”

The opposition has accused Zanu PF through the Local Government ministry of sabotaging service delivery in urban councils through late approval of budgets.

The ministry has in the past fired opposition councillors and replaced them with Zanu PF-aligned commissioners.

Mnangagwa also said his government was determined to deregister non-governmental organisations that refused to toe the ruling party line.

The threat came at a time when the Zanu PF administration has railroaded the Private Voluntary Organisations (PVO) Amendment Bill through Parliament to regulate the operations of non-governmental organisations (NGOs), civic, groups and trusts perceived to be anti-government.

According to civic groups, the Bill is a ploy to stop them from exposing misgovernance, corruption and human rights abuses.

“NGOs, which fail to stick to their mandate, I will push them out of the country, we can do without them, we don’t need them,” said Mnangagwa, before warning secessionists that they risked arrest.

“There are some Mthwakazi (members) who say they want Zimbabwe to be divided. They will speak, get old and die. Zimbabwe will remain a unitary State. No leadership in this world encourages its country to be divided. No one will divide it. If you want to do that you will leave shortly. Walk in the right path. We want peace, we want development. This country has its owners and it’s led by its owners. It can’t be led by people who get advice from whites,” he said.