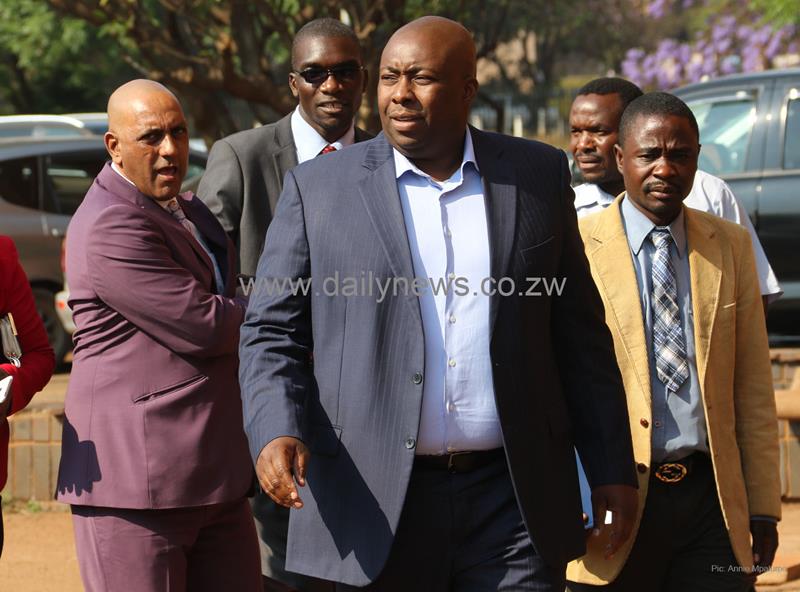 HARARE – It was an extraordinary week at the Harare Magistrates’ Courts
that saw four high-profile figures appearing in court on the same day,
facing various charges.

It was therefore a hive of activity as journalists from various media
houses convened outside the courts to capture this rare moment when four
of Zimbabwe’s well-heeled citizens were forced to abandon the comforts of
their homes to answer to an assortment of charges.

Former Cabinet minister Supa Mandiwanzira was appearing at the courts for
the first time, facing criminal abuse of office charges.

The ex-television personality, who was immaculately dressed, pitched up at
the courts on the same day another former Cabinet minister Saviour
Kasukuwere was also appearing in court.

Kasukuwere is facing four counts of criminal abuse of office.

But these ex-ministers were not the only notably heavyweight that set
tongues wagging at the Harare Magistrates’ Courts.

Some of the courtroom galleries were over-spilling and Bona Chikore,
Simba’s wife, was forced to follow proceedings while standing at the back
of the courtroom.

Chivayo is facing two counts of fraud and two charges of contravening the
Exchange Control Act while Chikore is facing allegations of detaining an
employee unlawfully.

In the case of Mandiwanzira, Kasukuwere and Chivayo, they are being
prosecuted by a Special Anti-Corruption Unit set up by President Emmerson
Mnangagwa in May this year.

Mnangagwa formed the special graft team, comprising of lawyers and
prosecutors as part of his pledge to deal with corruption.

Kasukuwere is accused of fraudulently parcelling out vast pieces of land
to former first lady Grace Mugabe’s sister Shuvai Junior Gumbochuma among
others.

His trial, which was supposed to commence on Wednesday, failed to kick off
after his lawyers Thembinkosi Magwaliba and Charles Chinyama demanded
further particulars from the State to adequately prepare for his defence.

Kasukuwere demanded a police entry diary, a due diligence report relating
to Gumbochuma’s land applications and approvals as well as minutes of
Cabinet meetings.

Magwaliba argued that these documents were crucial to his client’s defence
and that trial cannot proceed until they have been furnished with the said
documents.

However, prosecutor Zivanai Macharaga said he has done everything in his
power to ensure that the defence is provided with all the necessary
paperwork needed to prepare for trial but the requested documents do not
exist.

Macharaga argued that the defence was attempting to delay trial
commencement for the second time.

As the mistrust between the State and defence became increasingly evident,
Harare magistrate Hosea Mujaya resolved to subpoena the permanent
secretary in the ministry of Local Government, George Magosvongwe, to
compel him to release documents relating to Kasukuwere’s trial.

In Chivayo’s case, the State led by Veneranda Munyoro of the anti-graft
team finally put the charges to the accused.

In the last appearance, Munyoro refused to put the charges to Chivayo
fearing that he would plead not guilty and subsequently file an
application for the exception of charges.

Chivayo’s lawyer advocate Lewis Uriri had argued that the State had
already amended his client’s charges three times, making it impossible for
him to plead to the allegations.

As the charges were being put to Chivayo, it was revealed that former
Finance minister Patrick Chinamasa’s daughter, Kangai benefited from the
$5 million which was advanced to Chivayo for the Gwanda solar project.

Chivayo also loaded part of the money into his Visa card, Intratrek
Zimbabwe, one Tinashe Shavi and Kangai’s bank accounts.

Chivayo allegedly used some on the funds to purchase air tickets for women
who were stranded in Kuwait in 2016, school fees, civil suits settlements
and to purchase vehicles.

Media reports at the time revealed that Chivayo had bought air tickets
worth $58 900 for the stranded women who were lured to Kuwait to work as
housemaids but ended up being abused as sex slaves.

Magistrate Lazini Ncube rolled the matter over November 15 for ruling
after Chivayo’s filed an application for exception of the charges.

Mandiwanzira, a former Information Communication Technology minister, was
also arraigned on the same day over two charges of criminal abuse of
office relating to his alleged engagement of a South African company –
Megawatt – to do consultancy work for NetOne and, for appointing his
personal assistant to the Postal and Telecommunications Regulatory
Authority (Potraz) board.

Guvamombe remanded Mandiwanzira to November 30, with the trial set to
commence on December 10.

Mugabe’s son-in-law, Chikore appeared before magistrate Elisha Singano who
resolved that he be charged with his co-accused Simbarashe Mutimbe on
allegations of unlawfully detaining Zimbabwe Airways employee Bertha
Zakeyo.

Prosecutor Linda Gadzikwa successfully applied that the two be jointly
charged because they connived to commit the offence and that the
circumstances surrounding the matter were the same.

Through his lawyer, Chris Venturas, Chikore opposed the marrying of the
dockets, arguing that he will suffer prejudice if he is jointly charged
with Mutimbe on the same charge and on the same facts.

Trial has been set for December 14.