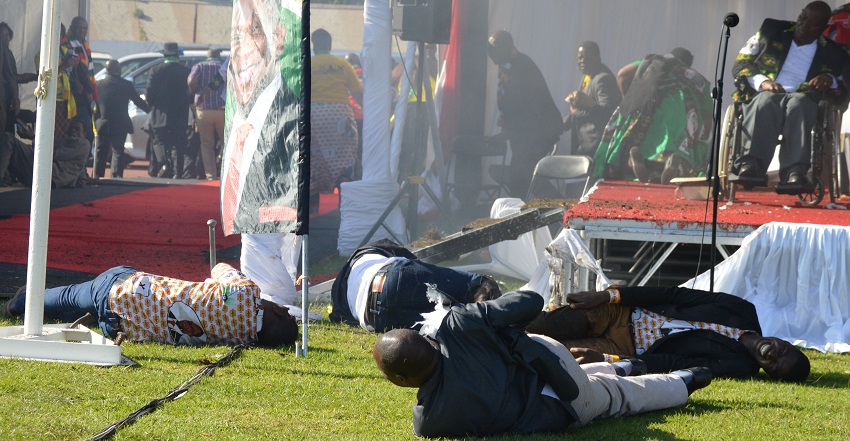 Mabasa Sasa, Sunday Mail Editor
Preliminary indications are that an as yet unidentified explosive device was lobbed towards President Emmerson Mnangagwa in attempt to kill him as he ended his rally at White City Stadium in Bulawayo yesterday.

Highly placed sources also said last night that the assassination attempt may be linked to efforts to stop the 2018 harmonised elections, though authorities are keeping an open mind on motives and suspects as investigations continue.

The national and Bulawayo provincial police command were keeping a lid on the direction investigations were taking by the time of going to print.

However, information gathered thus far indicates security footage of the moments before the blast points to someone throwing a device at the President.

“Footage is being analysed from all available angles and it appears something was lobbed at His Excellency. But there are several avenues of investigation and the video footage is just one of them.

“We need everyone to keep an open mind. People also need to know that this is an extremely sensitive security issue and authorities are not going to make statements about anything that has not been thoroughly investigated,” a source said.

Intelligence sector analysts said investigators were looking into the likelihood of this being tied into an attempt to either stop the July 30, 2018 harmonised polls by eliminating the Head of State and Government at such a late stage in the electoral day; or failing that, forcing a State of Emergency.

“We also know that there are madmen who think they can get famous by killing a president. There are several scenarios and all are being looked into. Just know that this is being thoroughly investigated.”

President Mnangagwa’s spokesperson Mr George Charamba last night said a State of Emergency or postponement of elections were not on the table.

He also said the President would not allow a witch-hunt and would instead allow the police and other security services to do their work.

“The President has stated his position on the matter of the explosion. He will not be driven by vengefulness or a spirit of retribution.

“Until the investigators pronounce themselves and present the evidence for arrest and prosecution, no one should ascribe motive or blame.

“As for the elections being postponed, a State of Emergency being declared, or a ‘transitional authority’ being formed, rest assured that the electoral programme proceeds as scheduled.”

He went on: “Let there be no mistake about this; inasmuch as Zec (the Zimbabwe Electoral Commission) will proceed, so will the administration ya VaMnangagwa proceed with its work programme and economic revival agenda.

“Government continues to function. If anything, the administration is even more emboldened to deliver on its pledges to the people of Zimbabwe in the face of such acts.

“Remember that when the explosion occurred, it came as the President finished addressing thousands and thousands of people in Bulawayo; people who showed they are in sync with his message to revive industry, not just in Bulawayo, but across Zimbabwe.

“Should that stop? Should everything grind to a halt because of retrogressive elements? The economic agenda is going ahead and the elections are going ahead.”