1255: The National Anthem is now being sung marking an end to the official proceedings here at the National Heroes Acre. That concludes our updates, thank you for joining us.

1233: President Mnangagwa is now leading the laying of wreaths.

1210: President has conferred the Zimbabwe International Friendship award in gold to United Nations representative to Zimbabwe Mr Bishow Parajuli who was described as a man of unquestionable credentials after having played critical roles including peace building, election reforms and immense contribution to the Cyclone Idai.

1205: President Mnangagwa has concluded his speech.

1204: “The austerity measures we have taken are certainly necessary…I thus wish to thank all of our people for their resilience and further urge them to bear with us..together with unity of purpose we will succeed,” says the President adding that he received a phone call from Vice President Chiwenga this morning. VP Chiwenga gave the President a solidarity message for heroes day.

1201: “We shall continue to protect our freedom, our justice which our fallen heroes fought for and strengthen Constitutionalism….it is commendable that the newly reconstituted Zimbabwe Anti Corruption Commission has embarked on its task with clarity,”

1157: “Access to higher learning and tertiary institutions will be improved…the education system must speak and respond to the everyday needs of the people as well as improve our country’s competitive edge in the global economy,”

1154: He says the United Arab Emirates and India are assisting Zimbabwe in retooling the country’s hospitals.

1149: “I’m pleased to highlight the commendable progress the banking sector has achieved on the Interbank market…on average the Interbank trades US$5 million a day…I wish to once again to urge all citizens to deal honest and honourably in the conduct of all of dealing,”

1143: “Dialogue and constructive engagement must be encouraged…we must not be found wanting…we must run a good race and fight a good fight. Long live our heroes and heroines,”

1142: “The experience of war makes people value peace all the more…these heroes and heroines at this shrines and others at marked an unmarked graves..gave their lives to uphold this peace, this unity and freedom. Let’s honour them by dedicating ourselves to peace,”

1139: President Mnangagwa says the nations pays high tribute to the heroes and heroines who fought for the liberation of the country.

1118: Home Affairs and Cultural Heritage Minister Cain Mathema takes to the podium and invites a Minister of Religion to share a word. 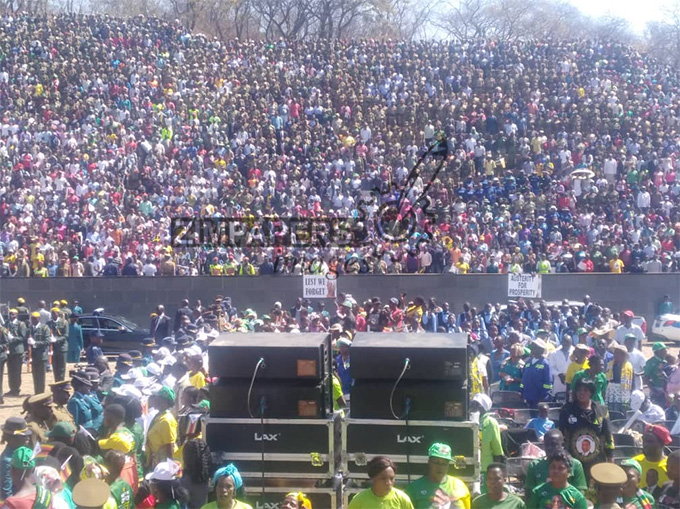 1102: Thousands of people from all walks of life including service chiefs, diplomats, Government Ministers, Zanu PF supporters are gathered at the National Heroes Acre. President Mnangagwa has just arrived much to the applause of many chanting “ED pfee”.

1030: President Mnangagwa will today preside over the main Heroes Day commemorations, with thousands of people expected to converge at provincial and district centres countrywide to honour heroes and heroines who sacrificed their lives to liberate the country from colonial bondage.