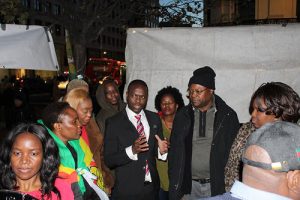 There will always be a miracle to rescue Zimbabwe. It might not be the cure for AIDS announced by Profit Magaya. But the prospect of oil gushing in Muzarabani will do for now to dampen disquiet over the country’s economic chaos.

It was a beaming President Mnangagwa – sweating in his trademark scarf – who rushed to the cameras to announce the news of this latest ‘game-changer’: a joint project with an obscure Australian group Invictus Energy to drill an oil well.

Cue: national euphoria. Our problems will be over. But the next day the prospects seemed rather less buoyant. Invictus said there had been no oil or gas discovery; a discovery could only be confirmed by drilling an exploratory well (see: http://www.newsdzezimbabwe.co.uk/2018/11/invictus-no-oil-discovery-in-zim.html)

Zimbabweans live in hope. Last time it was the diamonds. And what happened to that money? President Mugabe said $15 billion of diamonds had ‘disappeared’. So even if in the years to come someone finds oil in Zimbabwe where will the money go? The prospect is that the president would announce that another $15 billion had simply disappeared.

Who that president will be is really irrelevant. Recent disclosures have cast a new light on the shadowy figures who really call the tune in Zimbabwe. The lawyer Alex Magaisa now, like so many Zimbabweans, in exile, says the new finance minister Mthuli Ncube must have been appalled at the levels of corruption he found when he started looking at the state of the economy after he descended from his ivory tower to join the cabinet.

Magaisa says: ‘He would have been aware that there was a problem, but he might not have been prepared for the complex web of corrupt relationships and deals behind the veil of government. One feature that he may have observed is the presence of a powerful clique of individuals who control not only key sectors of the economy but also government itself.’

Magaisa examines Ncube’s on/off appointment of William Mutumanje (known as Acie Lumumba) as leader of his ‘communications taskforce’ which, Magaisa says, revealed scandalous details regarding grand corruption at the Reserve Bank, claiming that government was captured. To add drama and mystery to it, he withheld the name of the alleged captor of the State, simply referring to him as the ‘Queen Bee’.

Magaisa continued: ‘Seasoned watchers of the Zimbabwean political scene had already worked out that Mutumanje was probably referring to one Kudakwashe Tagwirei, boss of Sakunda Holdings, which was reportedly bought by Trafigura, a large commodities multinational which describes itself as being “at the heart of the global economy”. Sakunda has lucrative connections with the government in areas such as power-generation, mining and agriculture, among other major deals.’

He adds that the ‘Queen Bee’ is best seen not as an individual but as a group – the oligarchy – consisting of an influential network of political, military and business elites. He describes the oligarchy as government by the few who are rich and greedy over the many who are poor.

He concludes: ‘It is difficult to see how the oligarchy can be displaced without the removal of Zanu PF and the re-establishment of the democratic order. At the moment, Zimbabwe is not a democracy. It is an oligarchy. Plato told us that an oligarchy would eventually crumble when the inequality and poverty in society forced the impoverished poor to rise against the oligarchs. Therefore, the greatest danger of the oligarchy lies in the oligarchy’s own selfishness and inability to attend to the problems of the poor.’ (See: https://www.bigsr.co.uk/single-post/2018/10/27/Big-Saturday-Read-Our-Thing—Understanding-Zimbabwe%E2%80%99s-Oligarchy.)