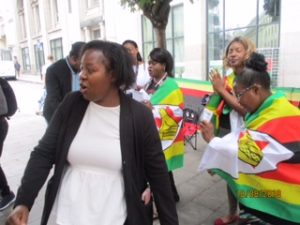 The British MP Kate Hoey, one of the observers at the Zimbabwe elections, says the international community should not accept the result. She said: ‘the UK government must take a lead to ensure that the Zimbabwean government is seen for what it is: a mark 2 Mugabe regime and one that deserves no support whatsoever.’

Ms Hoey’s voice carries extra weight because she is the long-time chair of the All-Party Parliamentary Committee on Zimbabwe.

She said elections in Zimbabwe since 2002 had been both violent and rigged. ‘Without doubt the election has been cleverly rigged but even worse is the fact that it is the military that is behind the regime and they are now unleashing a similar fear and terror campaign on leading opposition activists and curbing all protests by killing and arresting innocent Zimbabweans.’ (See: http://www.allnetafrica.com/2018/08/11/u-k-not -recognise-zimbabwe-election-result-kate-hoey/).

Ms Hoey’s comments will not be welcomed by the UK’s Foreign and Commonwealth Office which has been eviscerated by the Economist’s Africa editor Xan Smiley in an article in the weekly magazine the Spectator. He says Mnangagwa will almost certainly be given the benefit of the doubt by the British government (see: https://www.spectator.co.uk/2018/08/britain-should-spend-more-on-diplomacy-in-africa-and-less-on-aid/).

With the constitutional court due to hear the MDC’s rigging complaint on Wednesday, the Vigil can’t be optimistic. We share the mood eloquently captured by the Zimbabwean writer, Cathy Buckle who writes: ‘It was the words of the Southern African correspondent for the Financial Times, Joseph Cotterill, who best summed up the current, tragic irony of Zimbabwe when he tweeted on 3rd August: “On Wednesday I had a soldier raise his AK at me and threaten to shoot; on Friday a riot policeman moved to shove me with his shield. …I’m sensing you’d be absolutely f****** crazy to come and invest here. It’s just a hunch.”’ (See: https://www.zimbabwesituation.com/news/selfies-with-soldiers-no-one-shot-at-us-then/.)

Zimbabwe, desperate for foreign investment, is facing a grave solvency crisis according to Newsday. It says the government had a budget deficit last year of $2.6 billion – about 59% more than it collected in revenue (see: https://www.newsday.co.zw/2018/08/govt-in-deep-sovereign-crisis/).

FOR THE RECORD: 23 signed the register.

Newer Post
Hey, where is the commission of inquiry?
Older Post
Manyika: Why I am backing Chamisa