Brutalised by police in the line of duty

Source: Brutalised by police in the line of duty – The Standard July 30, 2017

Last Thursday around 1pm as we were going for an assignment in Chitungwiza, we passed through the Harare central business district to drop a colleague, Abigail Matsikidze who was on a different assignment. 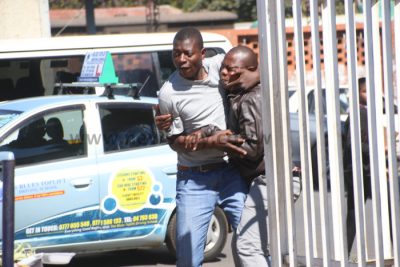 Along Julius Nyerere Way just after the flyover, we saw a huge crowd apaprently facing off with a few men, who later turned out to be police officers, carrying spikes.
There seemed to be chaos and our photographer Shepherd Tozvireva proceeded to take pictures as we drove.

While he was at it, a plain-clothed police officer rushed to our car, reached for the ignition and switched the engine off.

He demanded to know who we were and the reason why the photographer was taking pictures. We identified ourselves as journalists, but he still took away our car keys.
Myself and Shepard disembarked and showed the police officer our press cards.

After producing our press cards, one of the plain clothed police officers got into our car and sat at the front passenger’s seat.

He asked the driver to drive to Harare Central Police station where they wanted to know where journalists got the permission to take pictures of police details on duty.
The driver, Ralph Phiri, was given back the car keys and we complied.

As we approached Corner Innez Terrez and Kenneth Kaunda Avenue, the plain clothed police officer asked Phiri to drive through a one way road and as Phiri was asking if its lawful, another police officer opened the driver’s door and threw himself on him.

He started hurling all manner of insults and accusing him of having taken pictures of him the previous week.

All this time the engine was running and the police officer who was escorting us did nothing to restrain his colleague.

That was dangerous because the driver was under attack and the engine was running. I opened the back door and disembarked.

Tozvireva followed with his camera and fled towards uniformed police officers who were nearby to seek their intervention.

I stood just a few meters away from the vehicle because I wanted to see what will happen to Phiri as Tozvireva was asking for help.

This is when the officer who was punching the driver stopped. He came towards me, continuing with his tirade, now accusing me of taking pictures.

He punched me in the face and head several times. I tried to explain to him that I was not the photographer and that I was not privy to last week’s encounter he was referring to.

At that point he was joined by two other plain clothed officers to assault me. I wanted to flee but I was surrounded and all I could do was to shield my face to avoid further blows reaching my teeth and eyes.

After a few moments a uniformed police officer came to the scene and restrained his colleagues but he was also angry that we were taking pictures.

He grabbed me by the belt and asked me to get into the police station. I was bleeding from the mouth and my right eye was swollen. I saw Tozvireva being grabbed by the belt too.

We were asked to walk into the police station while Phiri was asked to drive the car towards the station.

As we arrived at Harare Central Police Station, we were detained in one of the offices and ordered to sit on the floor. The four of us complied and the officers who assaulted us disappeared.

Some officers came to take our details but interestingly they were condemning what had just happened to us. After sometime, Phiri and Matsikidze were told to go.

Myself and Tozvireva were asked to go and see one Superintendent Mudapakati who asked us to chronicle what happened.

After listening to our story, that he told us to go back to the tiny office and wait for them to decide whether we will be charged or not.

It took them several hours to advise our lawyer Kuzivakwashe Ngodza from the Zimbabwe Lawyers for Human Rights (ZLHR) that the they would be pressing charges against me for allegedly assaulting a police officer.

I was surprised and asked them how they arrived at that decision. The officers were quick to give me an option to pay a fine and go.

I didn’t take up that option because I felt I had done nothing wrong, to me it was the three police officers who were supposed to be charged.

I was released and told to return to the station Friday morning and upon my release was told in no uncertain terms to open a case against the three.

Although that was obvious, at that time what was more important for me was to seek medical attention.

They gave me a reference letter to seek medication. Another surprise awaited us on Friday morning as the police officers claimed they could not locate my docket.

After chronicling Thursday’s events at the complaints desk, I was advised to press charges against the three officers.

Back at the office, I was told by one of our editors who rushed to Harare Central Police station that he overheard the police officers laughing and bragging that they had assaulted journalists.

To them it was fun but to me the three acted unlawfully. They are part of the rogue elements that are putting the name of Zimbabwe Republic Police into disrepute.

I am glad police have a complaints desk which I will be approaching so that action is taken against the trio.