George Maponga
Masvingo Bureau
What started as an ordinary journey for 40 passengers who were aboard a Beitbridge-bound Boundary Express bus ended in horror after they were robbed of cash and valuables by six armed men on Monday.

The passengers and bus crew were left stunned by what appeared to be a well-planned robbery which ended with one of the passengers sustaining a stab wound.

Two of the robbers boarded the bus with other passengers at Mbudzi roundabout in Harare while the other two gang members joined their accomplices when the bus made a stopover in Mvuma.

When the drama ended in the early hours of Monday, the 40 passengers and bus crew had lost an undisclosed amount of money while Crispen Nyakatena (30) of Stoneridge in Harare was left with a deep cut on the forehead after being stabbed with a kitchen knife by one of the suspects.

Nyakatena was treated at Masvingo General Hospital yesterday morning and was discharged.

The robbers left their victims in a bushy area near Chartsworth turnoff.

Bus driver Josphat Chidhakwa was ordered at gunpoint, to move off the Harare-Beitbridge highway and to switch off the headlights.

According to the passengers, the robbers were armed with five pistols and a kitchen knife which was used to stab Nyakatena for refusing to obey orders.

The robbers deflated one of the bus tyres and went away with their loot in what appeared to be a Subaru vehicle.

The passengers helped the bus crew to replace the deflated tyre and the victims eventually managed to get to Masvingo Police Station where they made a report.

Speaking to The Herald at Masvingo Hospital, Nyakatena said he was stabbed on the forehead for refusing to obey orders.

“They took away US$89 which was in my pocket and kicked me off the bus. They forced me, the driver and conductor to lie on the ground and beat us up accusing the three of us of refusing to take their orders.

“They then left us after spraying the conductor with an unknown substance.”

Nyakatena said at one point, he thought the robbers would kill him.

“One of the robbers stabbed me on the forehead with a kitchen knife and I sustained a deep cut. Blood was gushing from the cut and I was hospitalised. Now I am feeling better.”

He said he also had to hide his passport and some money.

“I just took my chance and pulled out my passport and a wallet containing US$17 which I threw into the grass when they were facing the other side. Fortunately they did not see me.

“I was going to Beitbridge and they left me with only US$17 but I am happy to be alive,” he said.

Nyakatena said the robbers looked and acted suspiciously from the time they got onto the bus.

“They were making unnecessary complaints about sitting positions and  when the other four joined the first group in Mvuma they suddenly rushed to the front seats where they pulled out guns and demanded cash from everyone when we were approaching the Mushagashe tollgate.” 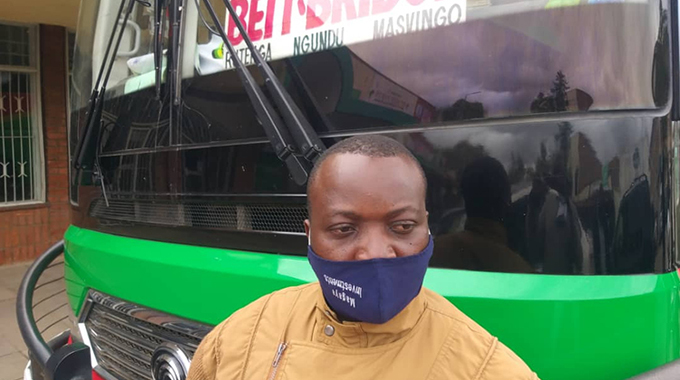 Another passenger Mr Chovhani Chovhani of Zaka said he suspected that the robbers had links to the bus crew.

“Some people were allowed into the bus for free. This shows the crew wanted many people to get inside so that they would rob them.

“I am lucky that they did not hit me but they went away with my US$260,” said Chovhani.

Bus conductor Shadrach Magaya, however, denied that they were part of the robbery syndicate.

“It is unfortunate if there are some

passengers who are saying we are linked to the robbers. We don’t know them and they actually assaulted me and sprayed my eyes with an unknown substance,” said Magaya.

He said the suspects each paid US$10 bus fare for the Harare-Masvingo trip.

“I was the first victim of the suspects because before robbing passengers they first confronted me and demanded refunds.

“They also took away US$320 which passengers had paid and an unknown amount of cash from the driver. They beat us up and ordered us to lie down on our stomachs when we had parked in the bush. We can’t be part of them,” said Magaya.

Masvingo provincial police spokesperson Inspector Kudakwashe Dhewa said no arrests had been made yet and investigations were continuing.