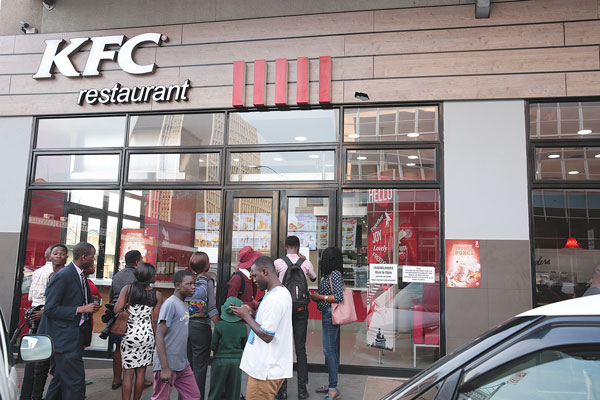 PANICKY retailers and suppliers yesterday started rejecting the surrogate bond note currency or electronic transfers after its value collapsed on Zimbabwe’s active black market, demanding, instead, to be paid in United States dollars as government threatened to withdraw licences in a bid to restore order.

Several companies and retailers closed shop over fears of a buyers run using electronic payments as panicky consumers rushed to hoard, while the cost of restocking would require payment in US dollar, laying bare the currency distortions in the economy.

Despite reintroducing foreign currency accounts (FCAs) in last week’s monetary policy announcement, authorities maintained that bond notes and electronic transfers were at par with the US dollars, despite trading at a premium of 260% on the black market.

Suppliers, who spoke on condition of anonymity for fear of government reprisals, said the move was aimed at protecting themselves from losses if real time gross settlement (RTGS) balances, currently valued at $6 billion, were to lose value.

“We are watching the market right now so that we see what value, if any, will the RTGS balances still have by end of the week. Industry is looking for policy direction from government and until that direction is there, we will not sell and if we do, we will only be accepting US dollars, nothing else,” a manager at a major wholesaler said.

Traders said they were now opening FCAs and would demand that all payments, particularly by exporters, who were allowed to keep their foreign currency, were transferred to those accounts.

“Most of these products on the shelves are imported. Our steel industry is almost no existent, spares and consumables are not locally available. These are all imported yet someone says we should receive payment in form of RTGS and valueless bond notes,” another supplier said.

Finance minister Mthuli Ncube appeared to be legitimising the new pricing regime, saying it was a way in which the economy was “self-dollarising”.

“The market is setting the pace. What is left for us is choreography and management of economic fundamentals. The economy has dollarised,” he said in an address to Chatham House in London on Monday.

Ncube has said the bond note will be demonetised at some point, because it was already a surrogate of the local currency, but “without fundamentals to support it.”

Prices of steel rose by over 400% over two days for those who were still selling, while cement was trading at $40 a bag, with most retailers having run out of stock, while suppliers, such as Sino Cement, were still charging $10 per bag, but split as 40% in US dollar and 60% in RTGS.

On Sunday, the central bank announced that it had started drawing down on a $500 million African Export Import Bank facility for essential imports such as fuel, electricity, wheat and cooking oil raw materials and packaging.

Confederation of Zimbabwe Industries (CZI) president Sifelani Jabangwe said his organisation would meet members today to assure them that the facility was enough to meet their needs.

“We are going to be having a meeting with our members tomorrow (today) to address these issues and after that meeting, we can give you a comprehensive statement. We have to assure our members that the $500 million stabilisation will be enough to capacitate industry and keep production lines running,” he said.

Jabangwe said the suspension of trade was caused by fear that retailers would be left holding worthless money in their hands, which suppliers would reject.

“If retailers know that they will be able to pay industry and receive supplies, then they have no reason to hike prices or close business. We have also seen an increase in prices, where the manufacturer has not increased wholesale prices. We also need to make sure this is stopped,” he said.

Industry and Commerce minister Mangaliso Ndlovu, who is currently in Turkey attending a business forum, said he was consulting on the situation back home before responding.

But Vice-President Kembo Mohadi threatened that government would withdraw licences from businesses demanding payment in US dollars and had sent out price monitors.

“The fuel stocks are enough to satisfy the needs of the country and the prices agreed by Zera (Zimbabwe Energy Regulatory Authority) still subsist. These are in the range of $1,31 (a litre) for diesel and $1,41 for petrol,” Mohadi told a Press conference after the sitting of Cabinet yesterday.

“All those caught selling fuel at prices not approved by Zera or those demanding the hard currency or engaging in other untoward trading practices will have their licences revoked.”

He argued that people hoarding goods were causing “artificial shortages”.

“Government is warning those that are hoarding basic commodities in order to create artificial shortages to stop these practices forthwith. Government will take stern measures against such malpractices that are bent on inflicting suffering on our people,” Mohadi said.

He also said the government position that US dollar and the bond note should trade at par has not changed.

The government had set up a committee to deal with the crisis, but has not yet been operationalised, he added.

In Bulawayo, some shops started selling their products in South African rand, arguing the bond notes had become useless.

A survey by NewsDay revealed that boutiques, pharmacies and shops dealing with motor parts in Bulawayo were only accepting the rand.

“We are now selling our products in rand because the bond note has lost its value. We hope this will keep us afloat,” a shop owner who requested anonymity said.

“We can’t keep on selling our products in bond notes when the government has made our money redundant. We fear what happened in 2008 period,” another shop owner said.

Some shops had resorted to removing price tags, updating prices on a daily basis.

In Gweru, most pharmacies were demanding payment in foreign currency.

The retail pharmacies have pegged their drugs in United States dollars and rand only, arguing that they were importing the medication.

“There is no option since I import most of my drugs outside the country,” one pharmacist said.