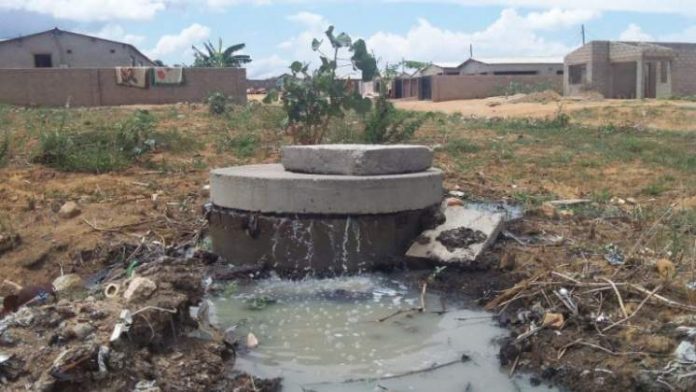 BY FORTUNE MOYO
IF anyone had told Sithuthukile Moyo that as an adult, she would be heading into the bushes when nature calls, she would have laughed it off as a bad joke.

But nowadays, that is not an uncommon occurrence for the 36-year-old bus conductor, who lives in Makokoba, one of the oldest suburbs in Bulawayo.

“My toilet has been blocked for over a month,” she said. “Sometimes I am forced to use the bush to relieve myself.”

In some neighbourhoods, sludges of raw sewage ooze from broken pipes and flow through streets and into homes. The stench fills the air. Even where pipes aren’t burst, blockages are causing untreated sewage to flow backward into yards.

“When the system is blocked, a manhole on my yard explodes and sewage runs through the yard,” says Themba Mpala, a motor mechanic.

Bulawayo, Zimbabwe’s second-largest city, is struggling to prevent the collapse of its ageing sewer system.

The pandemic, which has caused severe economic hardship, has exacerbated the problem, as many residents are unable to pay bills that fund regular maintenance and repairs.

Prior to the coronavirus, 56% of Bulawayo’s population had access to adequate sanitation, the highest of any province, according to a 2019 Zimbabwe National Statistics Agency survey.

Globally, 2,3 billion people lack access to adequate sanitation, according to the World Bank.

About 3,7 million people in Zimbabwe don’t have those services, forcing 22% of them to practice open defecation, according to government data.

When residents call to report burst sewer lines, Moyo says, they are given reference numbers, but no one shows up for repairs.

“One time when I reported a blockage, the local authority said they did not have enough trucks to attend to all the sewer bursts in the city,” she says.

Bulawayo deputy mayor Mlandu Ncube blames the crisis on what he says is an obsolete sewer system that has failed to keep up with the growth of the city of 640 000 people.

“We are seriously looking into the issue,” he says, and trying to solve the problem.

The pandemic has made the problem worse, Ncube says.

As many as 75% of the system’s maintenance crew have been exposed to the virus and have had to go into isolation, he says, so the council is hiring other companies to help.

Council spokesperson says Nesisa Mpofu says the number of customers who had defaulted had deprived the city of more than $189 million, about US$2,2 million.

“For the city council to provide good service, residents also need to play their part by paying their bills,” she says.

But Abigail Siziba, a gender officer at the Bulawayo Progressive Residents Association, says the city council should not expect people whose finances have been hurt by the pandemic to pay their bills.

“People are failing to pay due to economic challenges in the country,” Siziba says.

“At the same time, the cost of living is increasing daily for residents who are already struggling.”

The spilling sewage has found its way into drinking water and is making people sick.

Bulawayo recorded three outbreaks of diarrhoea in the last year and a half.

But there is another problem: The Environmental Management Agency is suing the city for polluting bodies of water, says Sithembisiwe Ndlovu, the agency’s provincial manager for Bulawayo.

The case is still pending because of a backlog that occurred when courts had to close during pandemic lockdowns.

“We are hoping the case will be heard soon since the courts are now open,” Ndlovu says.

Between 2010 and 2019, the agency issued 419 orders to stop municipalities from discharging untreated sewage into bodies of water, according to its report. Ten cases were taken to court, four of which ended with polluters paying fines.

Environment, Climate, Tourism and Hospitality minister Mangaliso Nqobizitha Ndhlovu says he isn’t willing to wait for the agency’s case against Bulawayo to go through the court process. He has ordered city council officials to start addressing the problem immediately.

“Bulawayo City Council has until the end of November this year to deal with the issue of polluting water or face heavy fines,” Ndhlovu says.

But complying with the minister’s order on such short notice won’t be easy, as Bulawayo lacks the funds to pay for a planned overhaul of the sewer system, she says.

The project requires $71 million, but the city has secured less than $25 million.

For now, city authorities are trying their best to appease disgruntled residents. They are offering free treatment at local clinics and medication to people who become sick due to the unsanitary conditions created by sewer breakdowns.

Moyo and other residents say they appreciate that gesture of goodwill from the city council. But what they need most is a working sewer system.

“Free treatment and medication is welcome because it’s their negligence that is making people sick,” Moyo says. “It’s more important to fix the problem permanently.”