Can the new Zimbabwean dollar relieve a chronic cash crunch?

Harare, Zimbabwe – Gason Mukuvadzi, a lanky man with boyish looks, sits behind a makeshift desk in Mbare’s Mupedzanhamo centre. An umbrella canvas shelters him from the blistering sun as he waits for customers looking to exchange electronic money for hard currency, neat stacks of which are perched on the table beside him.

Mukuvadzi is an EcoCash agent. He earns a commission by providing “cash-in, cash-out services” that allow customers on the EcoCash platform to convert the electronic balances in their mobile money wallets into hard currency, and vice versa.

But his business was badly hit in late September when the Reserve Bank of Zimbabwe temporarily banned and then severely restricted cash-in, cash-out services, saying that price gouging by agents was contributing to the rapid depreciation of the country’s currency, the Zimdollar, and exacerbating a chronic shortage of notes and coins.

“Mbare is a busy area and all transactions are cash-based. So there is strong demand for cash here,” Mukuvadzi told Al Jazeera.

On Tuesday, Zimbabwe’s central bank initiated its latest measure designed to alleviate the country’s physical cash crunch, releasing into circulation a new generation of Zimbabwean dollar notes and coins – the first of a planned one billion Zimbabwean dollars to be injected into the country’s financial system over the next six months.

But some economists say the infusion of new cash is not enough to meaningfully redress the underlying causes of the monetary dysfunction that has plagued Zimbabwe for years. 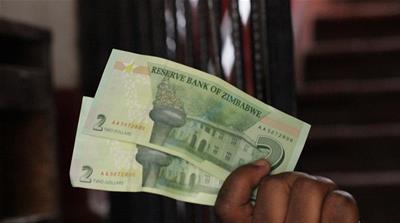 EcoCash agents have become an integral part of Zimbabwe’s payments system, with approximately 50,000 agents scattered throughout the country.

In the face of acute cash shortages – a persistent problem for years – most Zimbabweans have taken to using their mobile phones to execute financial transactions electronically.

More than eight in 10 transactions in Zimbabwe are made on mobile money platforms, according to the Reserve Bank of Zimbabwe. The platform with the lion’s share of those transactions is EcoCash, which is owned by Zimbabwe’s largest mobile phone operator, Econet Wireless Zimbabwe Ltd.

When the central bank announced a blanket ban on EcoCash on September 30th, Econet challenged the move in court, arguing it negatively affected millions of innocent customers.

The court challenge was only partially successful. Though the ban was lifted after three days, EcoCash customers have been limited to cashing out only 100 Zimdollars ($5) a day since October.

The restrictions have piled even more pain onto ordinary citizens dealing with an economic crisis including hyperinflation, stagnant wages, soaring food and energy prices and daily power blackouts.

“There is no money at the banks and everyone relies on us for cash here,” said Kundai Gohodza, an EcoCash agent who also operates a stall in Mbare’s Mupedzanhamo. “This is a busy area where most people don’t have physical money,” he told Al Jazeera.

For most Zimbabweans, the hard cash shortage is a daily obstacle that is expensive to surmount. Some EcoCash agents charge outrageous premiums of 40 percent to 50 percent for cash-out services.

But when those services are blocked, or the EcoCash network goes down during one of the country’s daily power outages, consumers can face even greater hardships because many businesses will only accept cash payments.

Charles Pilime, a pensioner, told Al Jazeera he was stuck in Harare without bus fare in September when EcoCash’s cash-out service was blocked.

“On those days, I had to ask for bus fare from friends who had cash,” he told Al Jazeera. “It was a very difficult time for me.” 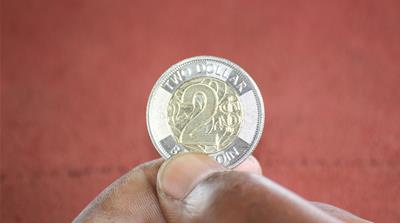 Shortages of physical cash date back to 2015, when US dollars, which had been the currency of choice after the country ditched the hyperinflation-wracked Zimbabwean dollar in 2009, started disappearing from the formal banking system.

In a desperate bid to end the shortage, Zimbabwe’s central bank introduced bond notes- a form of surrogate currency. But black market speculation quickly eroded the value of bond notes, triggering a shortage that the central bank subsequently tried to offset by creating electronic notes.

Earlier this year, bond notes – both physical and electronic – were merged into the Real Time Gross Settlement (RTGS) dollar, or Zimdollar, an interim currency that also fell prey to speculative attacks.

A government decree that outlawed the use of foreign currencies in local transactions failed to shore up the faltering Zimdollar. In August, Zimbabwe’s inflation rate hit 300 percent, the highest in the world, according to the International Monetary Fund.

On Tuesday, the Reserve Bank of Zimbabwe’s latest salvo against the cash crunch, the next-generation Zimbabwean dollar, finally hit the streets.

“We will make sure that we drip-feed the physical cash into the market in order to ensure that there is sufficient cash in the economy,” central bank chief John Mangudya told the Sunday Mail. “We believe this will also help in eliminating queues at the banks where people spend countless hours of productive time queueing for cash.”

Mangudya said the newly minted Zimbabwean dollars would not stoke inflation because the new physical notes would take the place of existing electronic money.

But some economists say the new notes and coins are unlikely to redress the cash crunch because they fail to address the underlying cause of the country’s monetary travails.

“Our research has shown that there is more prevalence of barter trade among rural Zimbabweans where people use maize as a currency because of the cash shortages,” Gift Mugano, an economics professor at Zimbabwe Ezekiel Guti University, told Al Jazeera.

“If we don’t deal with the problem of corruption where a handful of people get cash, this billion dollars will be taken up by the same privileged few who get cash when everybody does not have access to it.”