Catholicism and the Making of Politics in Central Mozambique 1940-1986

Rochester Studies in African History and the Diaspora. Belfast, Boydell and Brewer 2019

Source: Catholicism and the Making of Politics in Central Mozambique 1940-1986 – The Zimbabwean 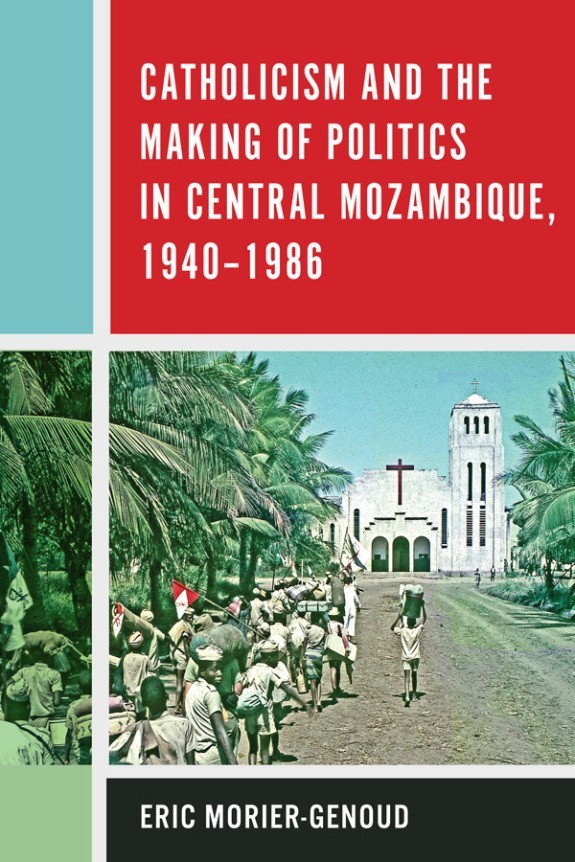 Eric Morier-Genoud lectures at Queen’s University Belfast and specializes in religions and politics in Mozambique’s contemporary history. This book focuses on the diocese of Beira (which since then has been subdivided into four more dioceses) in the most exciting years before and after independence. The author presents a case study on this period of extreme crisis and creativity that is up to date with the latest research because, unlike any official historiography, it is based on the dynamic interdependence and interaction of different actors on all horizontal levels and not on the effects of the strategies and decisions of political and ecclesiastical leaders.

The timeframe chosen was 1940-1986, the choice of the starting year is clear with the concordat between Salazar and Rome, ending with 1986 is less clear, probably because the momentum of the Mozambican Revolution imploded in the devastating, foreign-backed civil war making peace negotiations possible. 1940 was important because the colonial state wanted to make the Christian missions instruments of its interests and use them as proof of the effective occupation of its colony; and conversely, the church at best accepted the forced ‘Portuguesesation’ of the inhabitants and ideology of the ‘Luso-tropicalismo’ as a means of Christianization. Pre-programmed conflicts became acute in the 1960s due to worldwide decolonisation and inner-church reform movements. At stake was not only a multitude of individual conflicts, but the colonial system itself.

This comprehensive and thoroughly researched interdisciplinary analysis of all the actors reads like an accompanying research published a few decades after the events, and is instructive for many other current areas. Resende, the first Bishop of Beira (1943-67), became, contrary to the intention of the regime, its fiercest critic and a defender of those missionaries who stood up for the rights of the local people. Hence the main question of the study is: how could a dozen missionary societies shape the politics of the Church, both locally and globally?

These missionaries had quite different ‘spiritualities’ and nationalities. In terms of African languages, cultures and identity, the Missionaries of Africa (‘White Fathers’) were probably the most open… Nevertheless, there remained a certain contradiction between a missionary church imported by external institutions and a local church that can only develop in resistance or at least in taking distance from it. Whether the church in Mozambique today remains stuck at this dialectical intersection remains the decisive question as long as the Africanized church does not asssume a clear distance from the colonial church, but rather represents the status quo. The author has an optimistic outlook for the following years.

He first asks the question whether and how the Beira model has favoured a specific type of church. To answer this question, two facts, among others, are revealing. By 1967, half of the 826 students had fled the Zobué seminary, founded in 1949, to join the liberation movement. This explains the mistrust of the regime and the episcopate that a rebellious type of African-Christian elite was being formed there. Although the latter played an important role among nationalists as a qualitative change, it was very quickly confronted with factional struggles within Frelimo acting abroad in 1968. These were perceived by the dissidents mainly as ‘regionalism’. However, what for some was considered a conspiracy between the representatives from the south of Mozambique and those from northern and central regions, for others was a struggle between ‘reaction and progress’, which claimed too many lives among freedom fighters. Their leader Mondlane, chosen by President Nyerere to unite Frelimo, newly formed from three predecessor organizations, was also murdered in 1962. Mateus Gwenjere, the first African priest and “a product of the Catholic Church of Beira”, had fled from the Portuguese secret police to Tanzania in 1967 and together with the protestant pastor and vice-president of Frelimo Uria Simango, was delegated by Frelimo to present a statement at the UN in New York. However, after independence he was secretly executed together with Simango and other so-called ‘enemies of the revolution’. Morier-Genoud was unable to find anything in his sources to support the accusations made against Gwenjere.

Another significant development in Beira during that time was the so-called ‘exodus’ or the expulsion by the regime of the Missionaries of Africa in 1971, who protested the complicity of the church with colonial policy. This expulsion was preceded by informal networking between various ‘unruly’ missionary orders, which cannot even be found in secret service archives. Decisive for Beira’s radiating influence on the whole country, was a solidly functioning Interdiocesan Pastoral Center with annual study weeks in most dioceses. The inspiring and integrating function, which the author attributed to Bishop Resende until 1967, was carried on at least until 1971 by this Pastoral Center on the level of reflection and communication. On the practical level of capacity building for community leadership by lay people this role was discretely played by the Formation Center Nazaré, which itself was inspired by international best practices and very soon inspired a similar center in the north and in the south.  The leaders of both centres in Beira were expelled in 1971.

What the author rightly emphasizes are the repeated meetings at the local level and at the level of the Superior Generals in Rome, which are better documented. Thus the other missionary orders working in Mozambique were kept up to date and could clarify their positions among themselves and put pressure on the Vatican to take a stronger stand against the violation of human rights and  the denial of independence. Portugal’s colonies did not depend on the Propaganda Fidei but on the Secretariat of the Vatican State which was more interested in maintaining the ‘status quo’. Thus it happened for the first time, that a missionary order “took the lead” and confronted the Vatican and the World Church with accomplished facts, by declaring its retreat in protest against the Catholic bishops and their naive colonial complicity!

Rome remained embarrassed and silent. The West, which stood on the side of the colonial power and supported it with weapons through NATO, was radically awakened when its massacres became known worldwide (1971-74 Mokumbura, Wiriamu and Inhaminga). The Archbishop of Mozambique dismissed this as fake news of missionaries considered enemies of the church. Only the new administrator of Beira, Bishop Vieira Pinto, took a loud and clear stand and was expelled on the eve of the Carnation Revolution in 1974.

According to the applied method of “managing diversities“ which here reaches its limits, the author notes this as a splitting partisanship within the diocese of Beira, but this attitude of Vieira Pinto was the last possible, clear and courageous position against the unjust war. In this sense, Beira was probably at the “height of an unprecedented crisis”, as well as at the height of liveliness and creativity…

That this dynamic became a total “implosion” can it not also be due to the short-sightedness of the clerical church and also of the Frelimo in power? Its relationship to religions was at first ambivalent, but quickly became intolerant, no longer differentiating and even inhumane, (on the occasion of the implementation of the nationalizations of all missions as well as their works, or of re-education camps etc.). Thus it became increasingly contested and also challenged by religiously motivated passive resistance. My thesis is that the latter, combined with the destabilizing aggression of the neighboring White Africa (Rhodesia’s secret service CIO, apartheid South Africa from 1980 on), drove the Frelimo-government completely into the arms of the Soviet Union.

The attitude of the church, for its part, was neither coherent nor credible, both at the national level and in Rome. While before it was not permitted to have a single black bishop, suddenly many were appointed, even with the ulterior motive that natives could more easily defend church property. During colonialism and the war of liberation the Bishops’ Conference generally kept silent about human rights violations or even denied them; suddenly in the 80s “the Catholic Church changed its prophetic voice into a prophetic mission”. This benevolent statement of the author only becomes true in connection with an identification with the isolated prophetic voices before independence, and with a courageous distancing on the part of the new hierarchy from the colonial one.

The new episcopate more concerned with an imagined unity and continuity, claims for itself a teaching authority which stands above the realities (‘magisterium’) and instructs and judges the governing liberation movement about human rights, but does not recognize that it is also affected. In this respect the question is still open as to how far the church has found a new identity and role. After independence the national pastoral assembly decided to focus on and put all their efforts behind “small grassroots communities”, but perhaps this was more out of necessity than out of sincere conviction. This correct survival strategy still has to be implemented by a clergy, that inmidst of the prevailing climate of corruption receives too little encouragement. Yet Morier-Genoud encourages the church of Mozambique because it has, more than many others of the continent, abandoned the imperial model and found a new one, less hierarchical and more community oriented. He has enough local knowledge and acceptance to continue his study from 1986 until today and to prove this really trend-setting change true at the lowest horizontal structural level.

This study, which deals with the recent history until 1986, is fascinating and inspiring for all Mozambican actors, to whom in retrospect it offers new insights and hope. It will be presented in the country a few days before the Pope’s visit in early September 2019.

The study is, however, very enlightening for those who are engaged in a variety of activities everywhere and who hope through interacting levels to achieve groundbreaking results for their posterity. In this sense, this study is highly recommendable in terms of both content and methodology.

Newer Post
NRZ board meets on project
Older Post
Violence in Zimbabwe Is Escalating. But We Won’t Stop Fighting for Our Freedoms