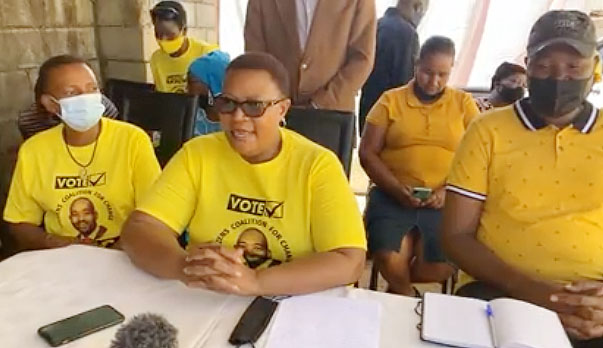 BY SILAS NKALA
OPPOSITION Citizens Coalition for Change (CCC) Bulawayo structures have refused to work with MDC-T leader Thokozani Khupe after she offered to rally behind Nelson Chamisa’s candidates in the weekend by-elections and 2023 polls.

Khupe made the announcement at a Press conference in Bulawayo on Monday.

The province said Khupe’s previous association with Zanu PF leader President Emmerson Mnangagwa made it difficult for them to trust her.

The development is threatening to divide the party, after the CCC national leadership embraced Khupe.

The party leadership also pointed out that the party was new and leadership positions would be decided by citizens.

CCC Bulawayo spokesperson Swithern Chirowodza said “if Zanla freedom fighters did not accommodate Morris Nyathi who was accused of selling out the liberation struggle, why should CCC entertain Khupe?”

“There is no need for diplomatic talk with an enemy. We will call a spade a spade. Zulu king Tshaka, a victorious military general, taught his warriors never to forgive an injured enemy lest the enemy heals, gathers courage and jumps to slit your throat,” Chirowodza said.

“We are Bulawayo, the headquarters of Matabeleland. We will not accept to be led by a person who run Mnangagwa’s schemes. The ink has not dried on the paper on which she wrote to two senators in the United States pleading for leniency on behalf of Mnangagwa. This is the same Mnangagwa who was the State Security minister during the Gukurahundi era.”

“This is the same Mnangagwa who was commander-in-chief of the army (Zimbabwe Defence Forces) that shot and killed six Zimbabweans on August 1, 2018. We will not drink with Khupe. She is political poison,” Chirowodza said.

Khupe said her decision to support Chamisa emanated from talks between the two parties. Recently, she was seen posing for pictures with CCC interim vice-president Welshman Ncube and member Abednico Bhebhe.

In 2018, opposition supporters accused Khupe of dividing the opposition vote, scuttling Chamisa’s chances of winning the presidential elections. She garnered around 45 000 votes.

Her decision to rally behind Chamisa came a few months after she was fired from the MDC Alliance by Douglas Mwonzora where she was vice-president.  She then declared herself leader of the MDC-T.