MDC last night claimed state security agents tried to snatch its leader Nelson Chamisa leading to a dramatic tussle with his security as he returned from a rally in Marondera. 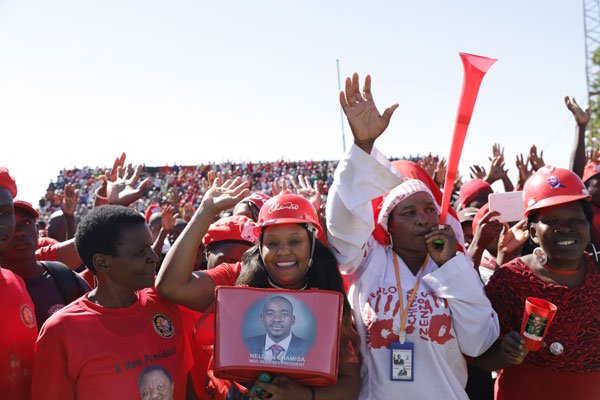 Mafume said about six vehicles followed Chamisa’s convoy from Marondera where he had addressed thousands of supporters at a “thank you” rally at Rudhaka Stadium.

“We had an altercation with the CIO (Central Intelligence Organisation). They then blocked the convoy and tried to retrieve Chamisa from the presidential car,” he said.

“Our security managed to block them from taking him or part of his personnel.

“When they were blocked, they then took one of the guys in the security team who managed to jump out of the moving car.”

Mafume claimed the same vehicles had been following Chamisa around and reports were made at Avondale and Harare Central police stations, but no action has been taken to date.

“Today has been their first brazen attempt to block the motorcade and also interfere with Chamisa’s movement.

“He is currently safe. Mabvuku residents came upon seeing the altercation and when the people increased, they the sped off,” Mafume said, adding they had pictures and number plates of the vehicles.

Nyathi referred questions to Senior Assistant Commissioner Charity Charamba whose phone was not being answered.

At the rally Chamisa had repeated claims that intelligence and military operatives had been trailing him.

“I would like to acknowledge members of the Central intelligence Organisation and military intelligence,” he said.

“Why I say so is because they have been following me whilst I was having prayers in Domboshava. They (intelligence officers) block our way. Even when I’m not with my entourage they follow and block them.

Chamisa said he was planning to meet South African President Cyril Ramaphosa and other Sadc leaders to apprise them of the deteriorating political and economic environment in Zimbabwe.

He said Mnangagwa’s government had failed to address the economic problems facing the country. Chamisa has been mobilising his supporters to stage demonstrations against Mnangagwa, claiming that the Zanu PF leader rigged the July 30 elections.

The army recently denied allegations that its intelligence officers were trailing the opposition leader.