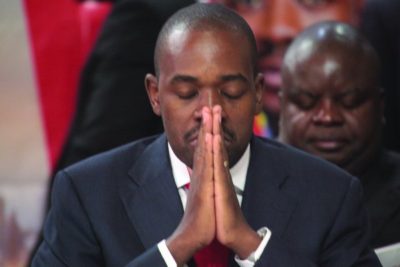 One of MDC leader Nelson Chamisa’s three deputies will be a woman after the party resolved to set aside the position for female candidates yesterday.

Chamisa has been nominated unopposed by 11 out of the 12 party provinces, with the South African branch yet to vote ahead of the May 25 to 26 congress to be held in Gweru, where the former minister will most likely be confirmed as the late Morgan Tsvangirai’s successor.

However, the race for his three deputies has a crowded field with Tendai Biti, Morgen Komichi, Welshman Ncube, Tracy Mutinhiri, Lillian Timveos, Lynette
Karenyi and Paurina Mpariwa having received nominations.

The decision by the MDC national council, which met in Harare yesterday, means that one of the heavyweights between Biti, Komichi and Ncube will fall by the
wayside.

Before the latest resolution, Chamisa had insisted that every post must be subjected to an open contest.

“In that regard, the national council resolved to consider on the position in the presidium so that one of the vice-presidents will have to be a woman,” he
said.

Mutinhiri, Timveos and Karenyi confirmed in an earlier interview with The Standard that they accepted nominations and are ready for the contest.

Mafume said the meeting did not discuss the need to reserve one of the VP posts for Matabeleland as was the norm, but said delegates were aware of the need for
ethnic balance.

“That was never considered, the congress delegates are aware, they have done this election many times,” he said.

“They are aware of the need to balance out the party and we are confident that they will come up with a position that will make sure that leadership of the
party is evenly distributed in terms of the regional considerations.”

Officials nominated for posts have been given up to Wednesday to indicate whether they are contesting.

“All nominees have up to Wednesday to indicate whether they are accepting the nomination or not,” Mafume said.

“This is because a number of people were nominated for various positions and it is necessary for them to accept where they have been nominated or to decline.

“Each person is entitled to accept one nomination,” Mafume said.

The MDC’s nomination process was marred by allegations of cheating and manipulation of structures.

Douglas Mwonzora, the party’s secretary-general who had indicated his desire to challenge Chamisa for the presidency, pulled out towards the end of the nominations, saying the process was unfair.