The People’s President, Advocate Nelson Chamisa today made spot visits to several places in the City of Harare speaking to citizens and assessing the plight of the Zimbabwean people. 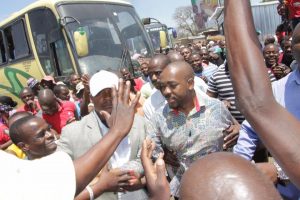 President Chamisa spoke to people aboard several buses including those with peripheral destinations, buses that were headed to Gokwe, Chiredzi, Hurungwe, Zvimba, Chipinge among other places.Faces brightened with expectation, hope and excitement. They were glad to see a President who is willing to listen to the magnitude of challenges being faced by citizens.Citizens expressed issues ranging from shortages of basics especially bread and cooking oil to unavailability of fuel.Citizens also raised shelf price spikes of commodities, at the Mbare terminals fares had doubled and even tripled in respect of some of the routes.

President Chamisa also visited several service stations around the city, there were meandering queues, while a number of service stations have no fuel. This fuel and price situation has made it very difficult for many citizens to travel for the holidays. While the few who managed to were assaulted with exorbitant prices.

These are challenges which require simple solutions yet Zanu PF has failed to deal with these.
The people of Zimbabwe expressed their confidence and hope in the leadership of Adv. Chamisa and the MDC.

Masses gathered to have a word or two with the President of choice sending Zanu PF into panic mode. In this mode, threats of unleashing repressive state apparatus against the President are being made.

We find these threats to be totalitarian, draconian and fascist. They are also influenced by ignorance and a clear misunderstanding of the law.The President, just like any other citizen, has freedom of movement and the right to privacy. He is not obliged at law to tell the police who he visits and where he visits. Visiting a place is not a public gathering.

We, however, understand that the state wishes to get a hold of the President’s diary and escort him wherever he goes for they so wish him to be the Commander in Chief in the face of current failure and mediocrity.

We appreciate that desire and assure those who have this eagerness that security provided to the President is adequate and that the time for these briefs will come.

The people of Zimbabwe will reclaim their victory and set Zimbabwe on a new path of transformation and shared inclusive growth.

The challenges President Chamisa witnessed today will be a thing of the past in a new Zimbabwe.

Behold The New. Change that Delivers!