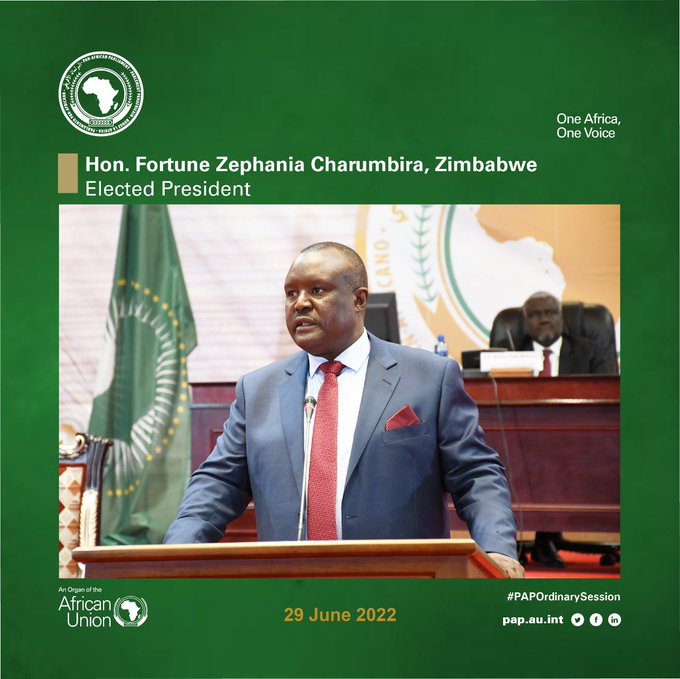 BY PROBLEM MASAU
PRESIDENT of the Chiefs Council, Senator Fortune Charumbira has been elected President of the Pan-African Parliament unopposed during elections held in Midrand, South Africa on Wednesday.

Charumbira was nominated by the PAP Southern African caucus last May, but the elections were aborted after disagreements on whether candidates from the Northern and Western African countries were eligible for nomination.

PAP is headed by a bureau consisting of a president and four vice-presidents. Members of the bureau represent the five regions of the continent.

Last year, parliamentarians caused havoc during a dispute over the election of a new PAP president, leading to the plenary session being indefinitely suspended.

“The unfortunate events that took place in this hemicycle on 27 May and 30 June 2021, during the aborted elections of the Bureau of the Pan-African Parliament, tarnished the image of this institution and that of the entire continent. The unbearable scenes broadcast on television channels and social networks have afflicted African citizens who are dumbfounded by such a debasement of Parliament. These acts of transgression and dishonour have been condemned across the Continent,” Mahamat said.

“In my capacity as the legal representative of the union and guarantor of the proper functioning of all its organs and institutions, I then requested, as a matter of urgency, the suspension of parliamentary activities until further notice. Of course, in this kind of situation, it is always appropriate to put things in perspective and to establish the responsibilities of all parties.”

The Senegalese President said PAP should champion the rights of Africans.

“In so doing, there will be no winners or losers. It will be a collective victory, the victory of reason, of transcending oneself and of fair play, the victory of the Africa we want. Africa will not be built by Manichean majorities. Africa will triumph by transcending what Mandela called the frailties of the human being, which are selfishness, the inability to forgive and the spirit of revenge,” he added.