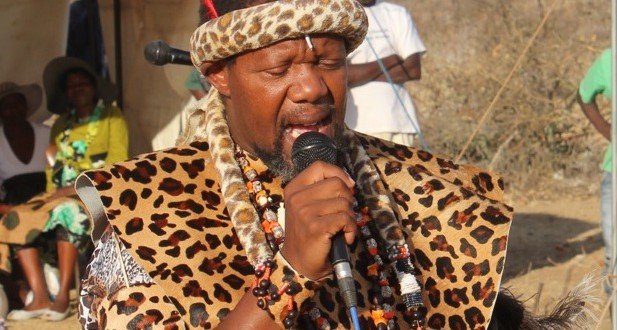 OUTSPOKEN Matabeleland traditional leader, Chief Nhlanhlayamangwe Ndiweni, has vowed to forge ahead with the “Save Ntabazinduna Mountain” campaign despite threats from government and Zanu PF.

Ndiweni has received widespread support from a cross-section of Zimbabweans, with the militant Mthwakazi Republic Party (MRP) going a step further promising security support for the chief.

Ndiweni angered government and the ruling party PF after he resisted the eviction of the Parsons/Davies family from Chiefs Lodge atop Ntabazinduna Mountain which is under his jurisdiction.

The mountain is a famous historical site that is important in the Ndebele culture, which Ndiweni and the College of Amakhosi — the highest traditional court in Matabeleland — consider sacred.

“The notion that such an important historic site can be tampered with in any manner whatsoever, most importantly portioned off to individuals we do not know, to individuals we have not sanctioned to get that place is totally and completely unacceptable,” Chief Ndiweni said.

“So, for us, we have no option, but to continue the ‘Save Ntabazinduna Mountain’ campaign.

“The people of Ntabazinduna and Matabeleland as a whole are expected to just sit and watch as their sacred historical mountain is broken up and given to individuals coming all the way from Harare. No.”

The chief also courted government’s ire after he called for the tightening of sanctions against government officials in response to the Ntabazinduna Mountain land grab.

Ndiweni said Matabeleland traditional leaders would not back down on the sanctions mantra until government reversed a decision to remove the Parsons/Davies family.

“In a bid to stop this madness, we have chosen to use the issue of sanctions as a means of stopping this unacceptable act by the administration. For us, this whole issue begins and ends because of Ntabazinduna Mountain,” he said.

“We in Matabeleland are still grappling with the issues of the 1980s genocide. The issue of using sanctions in a bid to keep control of our Ntabazinduna Mountain is acceptable, when one looks at the dangerous issues within this matter.”

MRP president Mqondisi Moyo said the militant party was going a step further to provide security to the chief after suspected Zanu PF youths threatened to seize his vehicle.

“As MRP, we will leave no stone unturned and we will match Zanu PF man-for-man. We are yet another generation and we are the survivors of the 1982-1987 genocide. As such, we are not going to fold our hands as our oppressors and tormentors devour us,” Moyo said.

South Africa-based Ndebele King Bulelani Collin Khumalo also condemned the attack on Ndiweni, describing it as an attack on the institution of traditional leaders as guaranteed in the constitution.

“This attack constitutes a serious attack on the institution of traditional leaders as a whole and on the rule of law and constitutional democratic order which anchors our governance institutions,” the Royal Crown Council, which represents Khumalo, said yesterday.