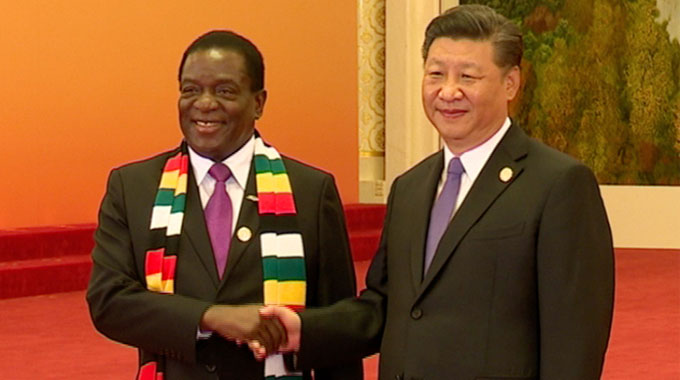 Tawanda Musarurwa and Fatima Bulla in BEIJING, China
The 2018 Summit of the Forum on China-Africa Co-operation (FOCAC) was officially opened here yesterday, with Chinese President Xi Jinping pledging $60 billion in financing for Africa.

The money is expected to fully foster the China-Africa comprehensive strategic and cooperative partnership, bringing the total amount pledged to the continent by the Asian giant to $120 billion since 2015.

At the 2015 Johannesburg Summit, President Xi made a $60 billion pledge in loans to African countries.

“The financing will be provided in the form of government assistance as well as investment and financing by financial institutions and companies,” President Xi said in his keynote address.

Chinese companies were also encouraged to make at least $10 billion investments in Africa in the next three years.

The Chinese President announced eight major areas of collaboration in the coming years.

These include launching an industrial promotion initiative through the China Africa Economic Expo in Africa to build and upgrade economic trade zones and agricultural modernisation.

In that regard, there are 50 agricultural programmes to be implemented, and a $1 billion emergency aid programme.

The agricultural programmes will see 500 senior agriculture experts being sent to Africa to train young researchers.

The second collaboration will be the launch of the Infrastructure Connectivity, which will drive key connectivity projects.

This will also support Chinese companies investing in infrastructure in Africa.

The Trade Facilitation Initiative is the third area of collaboration, which aims to increase imports of non-resource products from Africa.

The fourth one is the Green Development Initiative aimed at environmental protection, issues of climate change and wildlife protection.

Capacity-building is the fifth initiative which entails a plan to set up a China-Africa Innovation Centre. Under the same initiative, 50 000 government scholarships and 50 000 seminars and workshops will be hosted.

There are plans to build China-Africa Friendship Hospitals and the training of more medical specialists.

The seventh initiative, the people-to-people exchange programme, will see China establish an institute of African Studies among other issues.

“In order to achieve this, China will extend $60 billion which will include $15 billion grants, interest and concessionary loans, $20 billion in credit lines, $10 billion for setting up of a special fund, and then 45 billion for financing imports from Africa, and $10 billion for companies in China to invest in Africa in the next three years,” said President Xi.

In addition he said debt incurred by poor African countries due to mature by 2018 will be exempted.

The exemption will be granted to Africa’s least developed countries, heavily indebted and poor countries, landlocked and small island developing countries that have diplomatic relations with China.

African Union (AU) chairperson Rwandan President Paul Kagame said China’s actions demonstrated and showed the way in what is lost in not engaging and partnering with Africa.

“The China-Africa partnership has grown and is aligned with the AU’s Agenda 2063. It’s time for Africa to improve project management and increase participation in the private sector. We have to articulate the continent’s priorities, with focus to connectivity to the global world.

“The reformed AU will be more effective going forward. Growing ties with China don’t come at anyone’s expense, the gains are enjoyed by everyone who does business in our continent. We should strive to improve performance, tackling issues in a fair manner. Respect does not concern one side only but all of us. I salute President Xi’s personal engagement since taking office, he has visited every region of the continent including countries of every size and economic profile,” he said.

Co-chair of the FOCAC 2018 South African President Cyril Ramaphosa said the relationship between China and Africa was premised on principles of equality, trust, mutual respect and benefit.

He said FOCAC had grown since 2000 and the progress made demonstrated the tangibles of the partnership.

“The relationship between China and Africa is forged on the fundamental rights of Africa to determine its future and is premised on Agenda 2063. We are working towards and Africa of good governance, democracy, justice, rule of law and respect of human rights,” he said.

Indications from FOCAC 2018 are that the China-Africa partnership has broad vistas, and China and Africa can forge an even stronger comprehensive strategic and cooperative partnership.