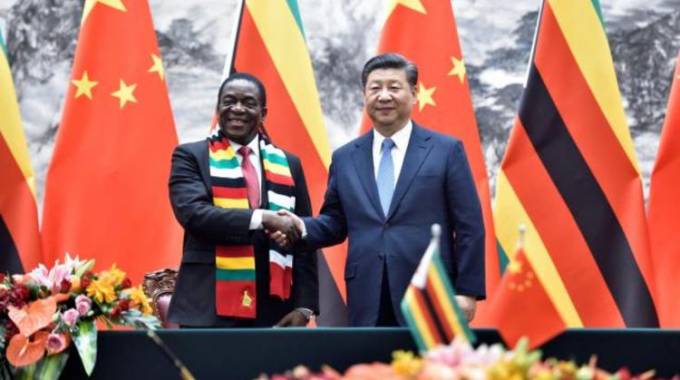 Source: China’s strategy in Africa: Thinking deeply but moving cautiously | The Herald May 16, 2018

Wang Li Correspondent
IN just one week from March 29 to April 4, Chinese President Xi Jinping has warmly welcomed heads of state of Namibia and Zimbabwe. Both countries are located in Southern Africa, with huge potentials to become great and wealthy players.

In addition, two countries have agreed with China to establish or to upgrade bilateral comprehensive strategic cooperative partnership.

It is self-evident that Africa has been one of the key parts of China’s overall strategy in foreign affairs.
Now the question is why the leaders of both Namibia and Zimbabwe visited China closely one after another, and then what can they do to enhance China’s growing interests and influence on the African continent since Beijing’s intention has been questioned by the West?

It was reported that former US Secretary of State Rex Tillerson visited Africa during his last trip in March when he openly attacked China’s investment policy in Africa, saying it aimed at promoting China’s own interests rather than the interests of African states.

Undoubtedly, his remarks were declined by the AU Chairman Moussa Faki Mahamat.
Historically speaking, China and majority of African states have been good partners and some of them are called all-weather friends.

Both Namibia and Zimbabwe are among the latter group. For example, President Mnangagwa came to China in the 1960s for military training.

As he told the Chinese media, he had great admiration for Chinese leaders’ efforts and courage to combat corruption and to eliminate rural poverty.

During his visit to Beijing, President Xi concurred with President Mnangagwa that the two countries stood by each other no matter how international relations changed.

The two sides vow to continue high-level exchanges, draw the blueprint for cooperation in all areas and keep supporting each other on issues related to core interests and major concerns.

Considering that there are new opportunities for the development of China-Zimbabwe relations, President Xi said there were joint efforts with President Mnangagwa to draw a new blueprint of bilateral relations aimed at bringing more benefits for the people of both sides.

More specifically, the two countries should enhance their strategic interconnection, deepen cooperation under the framework of the Belt and Road Initiative and continue to cooperate in such areas as infrastructure, agriculture and finance.

In response to President Xi’s remarks, President Mnangagwa said he hoped to develop socialism with Zimbabwean characteristics in his country in light of President Xi’s vision on China’s.

To that end, Zimbabwe seeks to tap into the huge financial resources, technical expertise and modern technology of its all-weather friend -China.

Clearly, China would be able to play the sound role in Zimbabwe as it is seeking deeper economic ties with China to leapfrog its economy battered by years of Western sanctions.

In the same way, China has worked steadily to promote its bilateral ties with Namibia that has a huge land with rich resources and less population.

As Xi recalled that both countries and the two ruling parties have enjoyed a profound traditional friendship which could be traced to their common struggle against imperialism and colonialism, supported each other in national reconstruction and continuously consolidated friendly cooperation.

Now as the two countries have entered new development stages, they share similar governance philosophy and have complementary advantages in their economic cooperation. As an “all-weather” friend of Namibia, China is ready to work with it to boost bilateral relations for continuous steady and positive development so as to better benefit the two peoples.

Here, President Xi smartly stressed that by combining with respective advantages, the two sides would be able to grasp the priority areas and key projects.

President Xi welcomed Namibia to actively participate in the “Belt and Road” initiative and expressed willingness to jointly strengthen policy consultation and alignment of plans as well as facilitating cooperation in key areas.

To that end, China stands ready to intensify cooperation with Namibia in wildlife protection, with zero tolerance to illegal activities such as smuggling of wildlife products and others.

As China supported Africa’s just cause in history and continuously help Africa’s development today, it is seen as Africa’s sincere partner and friend.

He reiterated that Namibia actively supports cooperation under the framework of the Forum on China-Africa Cooperation, and enhancement of coordination and cooperation between China and Africa in international affairs.

It is believed that China and Africa will join hands to build a closer community of shared future for China and Africa and constantly inject new impetus into the development of China-Africa relations.

In sum, both Namibia and Zimbabwe have demonstrated their willingness to participate in the historic project of “the Belt and Road Initiative” proposed by President Xi, as President Mnangagwa openly hailed it as a grand vision for the future.
Due to this, both Zimbabwe and Namibia are among the countries that have embraced it.

Undoubtedly, China and its proposed “BRI” will enhance global trade for the benefit of all countries’ economy.
Considering the deeply-rooted legacy of colonialism and neo-colonialism, China’s strategy in Africa is highly advised to think deeply but move cautiously.

After all, it is a long-process for China to learn “foreign affairs” in practice. – Agencies.