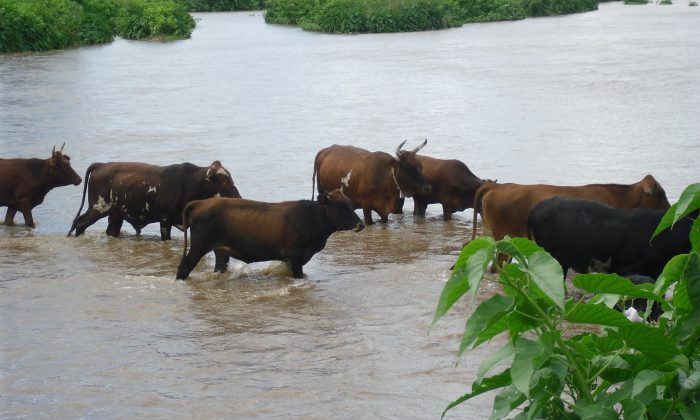 Villagers allege that Odzi River in Zimbabwe has been polluted by Chinese companies. (Andrew Mambondiyani for The Epoch Times)

MUTARE, Zimbabwe—The environmental impacts by some Chinese companies operating in Zimbabwe can only be described as catastrophic, according to leading environmentalist and human rights activist Farai Maguwu.

Maguwu told The Epoch Times that some Chinese companies don’t even have proper licenses to operate in Zimbabwe.

And as such, these companies are leaving trails of immense environmental degradation across the country, particularly those in extractive sectors such as gold, diamond, and chrome mining.

Villagers in affected areas have claimed that some Chinese companies discharge toxic waste into their water sources resulting in human diseases, a drop in crop yields, death of livestock, and dwindling numbers of fish in the rivers. Some villagers said tailings from the mines were clogging dams and rivers and affecting the availability of water for irrigation.

In Marange diamond fields, these allegations were vindicated by a scientific research study done by the University of Zimbabwe and commissioned by the Zimbabwe Environmental Law Association which proved that there were high levels of toxic waste in the rivers.

“[Some Chinese companies] are guests of powerful politicians [in Zimbabwe] and this was well covered in the 2013 Chininga report [by the Zimbabwe Parliament Portfolio Committee on Mines Energy chaired by the late Edward Chindori Chininga],” said Maguwu, a director for the research and advocacy NGO, Center for Natural Resource Governance. The NGO is fighting to promote good governance in natural resources.

As reported previously by The Epoch Times, Zimbabwean legislator Prosper Mutseyami also alleged that Chinese companies enjoyed protection from the government, as China is currently the biggest investor in Zimbabwe.

Mutseyami, a chief whip for the opposition party Movement for Democratic Change in Zimbabwe’s House of Assembly, said the government was afraid to anger China, which is among the few countries that currently support the Zimbabwean government.

In the past few years, China has availed loans and grants to the Zimbabwean government for various infrastructural projects including the expansion of Robert Mugabe International Airport and to upgrade the country’s electricity power plants in Kariba and Hwange.

The southeast African country is expecting to receive even more loans and grants under China’s ambitious infrastructure plan, the One Belt, One Road initiative.

‘Protection From the Government’

In 2013, professor Sheunesu Mpepereki, who was the chairman of the Environmental Management Agency—an arm of government mandated to protect the environment—was shocked when he came face to face with the operations of some Chinese companies in the country’s Matabeleland South province.

During that time, many irrigation schemes in the semi-arid region had shut down due to siltation of major rivers and dams in the area by activities of some Chinese companies. This resulted in a precarious food situation. The siltation of water sources also affected water supplies to urban centers in the province while livestock farmers in the region who depend on the rivers for water were affected.

But Maguwu said even Zimbabwe’s Environmental Management Agency had no power to deal with Chinese companies due to the impunity they enjoy.

“Communities can’t stop the Chinese because they have the protection from the government,” he said.

Repeated efforts to get a comment from the Environmental Management Agency were fruitless as the agency’s spokesperson, Steady Kangata, didn’t respond to email or Whatsapp messages from The Epoch Times.

But Maguwu said massive environmental degradation by Chinese companies were evident in various parts of the country.

“It’s the same in Marange, their [mining] concession has no limit; they were permanently expanding their concession, thereby encroaching onto other people’s land. In Hwange, they are accused of taking people’s land without due process,” he said.

Marange said his organization was educating communities in nonviolent resistance to destructive mining activities by the Chinese companies.

“We are planning a huge protest in Marange to force the government to withdraw Anjin Investments from the area,” he said.

Anjin Investments, a diamond company partly owned by the Chinese, will return to mine diamonds in the Marange area but local people are against the move.

Before Anjin Investments was booted out of Marange diamond fields by former Zimbabwe President Robert Mugabe’s government in 2015, villagers and human rights activists accused the company of various human rights violations and evasion of paying taxes and royalties.

Francis Danha, a leader of the opposition political party, the 1980 Freedom Movement, said the best way to deal with Chinese companies flouting environmental laws in Zimbabwe is by exposing their activities through investigative journalism.

“We need active journalism which clearly outlines their [Chinese companies] activities as well as exposing them,” Danha said.

Danha alleges that it is hopeless to approach the corrupt African governance systems when violations are exposed because they are puppets of China and paid to protect Chinese interests.