Anjin Investments, a diamond company partly owned by the Chinese, is set to return to the mines in the Marange diamond fields of eastern Zimbabwe. 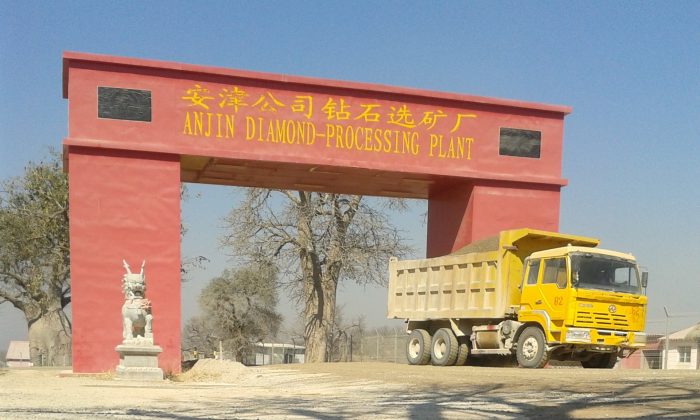 The entrance to Anjin Diamond Mine in Marange, Zimbabwe. (James Mupfumi)

MUTARE, Zimbabwe—Anjin Investments, a diamond company partly owned by the Chinese, is set to return to the mines in the Marange diamond fields of eastern Zimbabwe, but its return is generating anxiety among local villagers and human-rights activists.

Before Anjin was booted out of the Marange diamond fields by former Zimbabwe President Robert Mugabe’s government in 2015, villagers and activists had accused the company of various human-rights violations and evading payment of taxes and royalties.

However, in January, President Emmerson Mnangagwa’s government announced that Anjin and Russia’s Alrosa are the foreign companies that would participate in Zimbabwe’s diamond industry.

The Marange area is semi-arid and many people there are poor, only scraping together a living through subsistence farming. But when diamonds were discovered in the area in 2006, many people anticipated benefiting from mining the lucrative alluvial gems.

However, more than a decade after the discovery of the diamonds, many people living in areas surrounding the diamond fields have said hopes of benefiting from the gemstones have remained a mirage.

Activists and experts in Zimbabwe are worried of the growing Chinese influence in the country’s critical infrastructure and natural resources.

Chinese companies and government have extended loans worth billions of dollars to Zimbabwe in the past decade, and there are concerns that China would take the country’s land and critical institutions to recover its funds if Zimbabwe fails to pay back the loans.

In 2015, Mugabe’s government booted out diamond companies—Anjin, DMC, Kusena, Mbada Diamonds, Gye Nyame, and Marange Resources—operating in Marange for lack of transparency in their operations.

Malvern Mudiwa, a resident of the Marange area, alleged that while Anjin was extracting diamonds, the company said it was incurring losses as an excuse to skirt paying tax and royalties.

“We recommend that Anjin must honor all their dues first before opening a new page. According to the [rural district] council records, they [council] never collected a cent from mining companies, one of them being Anjin. We are eager to see a change in their attitude,” Mudiwa said.

James Mupfumi, the director of the Centre for Research Development, an investigative NGO, said his organization condemns the return of Anjin to the fields and the involvement of a military outfit notorious for gross human-rights abuse of workers and communities.

Mupfumi, who been documenting various rights abuses by the diamond companies in Marange, said Zimbabwe’s auditor general report of 2016 unearthed some irregularities.

“Our recommendation is that the government must roll out a diamond policy to guide the diamond industry. Anjin must be brought before the law to pay compensation to victims of human-rights abuses,” Mupfumi said.

He said an independent audit must be conducted so that Anjin is made to return funds the company externalized.

“In line with the Constitution [of Zimbabwe] the diamond policy must empower parliament with the authority to verify all mining deals before concessions are awarded by the government,” he said.

The director of Zimbabwe’s Centre for Natural Resource Governance, Farai Maguwu, said his organization strongly opposes the return of Anjin because it never remitted anything to the country’s treasury during the Government of National Unity from 2009 to 2013, which he said was the peak of diamond production in Marange.

“Then-Finance Minister Tendai Biti [2009–2013] was on record saying so. And they [Anjin] also owe hundreds of workers salaries and severance packages. The company treated black people like slaves and I’m very shocked President Mnangagwa is bringing back such a company … he certainly must know some things which all of us do not know,” Maguwu said.

However, Munyaradzi Machacha, Anjin director, said his company hadn’t yet been advised by the government to return to the Marange diamond fields.

“We are ready to go back to Marange, but we have not yet been advised [by the government] about the new developments,” Machacha told The Epoch Times.

Machacha has also maintained that Anjin operated above board in Marange and denied allegations of human-rights abuses. In an interview with The Epoch Times in late 2018, Machacha said the claims that Anjin abused its workers weren’t true.

“There was nothing like that [at Anjin mine], “he said.

Zimbabwe presidential spokesperson George Charamba told the state-owned The Herald newspaper, that Mnangagwa had put the “Zimbabwean interest at the heart of exploitation of diamonds only accepting foreign participation by way of selecting companies from Russia (Alrosa) and China (Anjin).”

The government said the Zimbabwe Consolidated Diamond Company, a state entity, private-owned Murowa Diamonds, and two other companies would be allowed to mine the country’s diamonds.