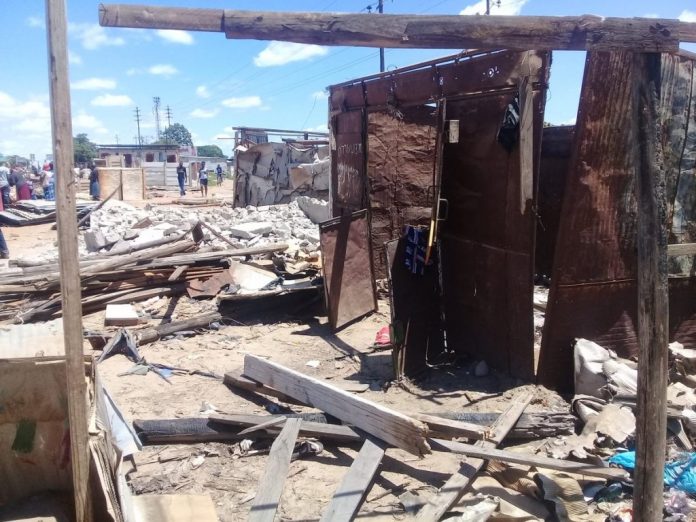 The demolitions were done in a joint operation of the municipality and the police.

In June last year, council and police also teamed up for a similar exercise.

The areas that were affected by the weekend demolitions included Unit L, C-Junction, and Makoni shopping centre where Econet branded booths used to sell cellphone gadgets were also razed down, along with illegal tuckshops and stalls selling furniture and building materials.

“The municipality notes with concern continued illegal vending at undesignated sites and road servitudes despite an existing enforcement order issued in terms of section 32(6) of the Regional, Town and Country Planning Act (Chapter 29:12) on July 2, 2021 which came into effect on August 2, 2021. The enforcement was followed by several other notices which regrettably have been largely ignored,” Machona said.

“In view of the continued non-compliance with the enforcement order as stated above, council is left without an option except to proceed by way of enforcing the same in accordance with the law. The informal traders and SMEs operating at undesignated sites are therefore, implored to vacate with immediate effect.”

“We are shocked by Chitungwiza municipality’s barbaric action; it seems they are no longer respecting the law or the courts. They are just demolishing vending stalls because they hate residents/informal traders.

“We have a court order that was granted in June last year to block these demolitions and it compels council to first build designated marketing places. But since last year, there is nothing to show, it’s all fake promises one after the other. They are playing with us and are forgetting that we are the ratepayers.”

Kuvheya blasted council for being quick on demolitions, but slow on issues of service delivery such as garbage collection.

Chitungwiza Businesses Association secretary-general David Ndoro said: “This is very bad, especially considering that from time-to-time council demolishes the structures, but fails to allocate the affected people rightful places that they can operate from. They demolish without offering a solution. This is unacceptable.  Council authorities are perpetual liars. They once made people to pay US$5 to be allocated stalls and nothing happened. A year elapsed. They did that again after last year’s demolitions.”

Machona told NewsDay that the demolitions would continue.  She urged vendors to be patient, adding that council was constructing vending stalls for them.

“Yes, we are going to continue with the operation. All illegal construction at council beerhalls, along road servitudes, and those without council papers must move out. Council identified sites for markets in every ward.  We are going to construct the markets and our residents should be patient and use the designated vending sites which are there. We are taking necessary steps to ensure that everyone is accommodated,” she said.