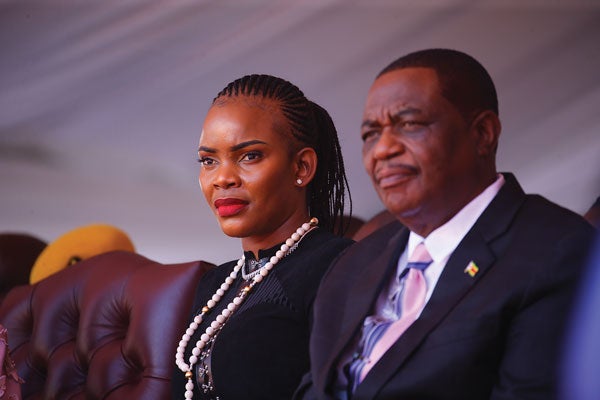 VICE-PRESIDENT Constantino Chiwenga’s estranged wife, Marry, who is in custody over charges of allegedly assaulting her house maid, has accused her husband of engineering the allegations after his initial failed attempts to have her locked up for failing to surrender a second passport in the attempted murder charge.

Marry said Chiwenga was using State resources to ensure that she is incarcerated at all costs and even on flimsy charges. Marry said this in her bail appeal application filed at the High Court on Monday this week and the matter is set to be heard today.

Through her lawyer Beatrice Mtetwa Marry said: “She (magistrate Bianca Makwande) also misdirected herself in her failure to consider and take into account that the charges are mere allegations engineered by a disenchanted spouse (Chiwenga) and that the presumption of innocence still operates. She also erred and misdirected herself in equating allegations of common assault to attempted murder.”

“The applicant (Marry)’s husband had attempted to engineer a breach of her bail conditions by pretending she was in possession of a passport which was actually in his possession. The likelihood of his having engineered the assault charge in order to achieve what he failed to do by lying about the passport was a factor the magistrate ought to have taken into account.”

Last Saturday, Marry was remanded in custody by Makwande, who ruled that she had a propensity to commit violent crimes, an assertion dismissed by Mtetwa.

“She (Makwande) also erred and misdirected herself in her conclusion that two alleged incidents arising from circumstances where one spouse is fighting another constitute evidence of “propensity” to commit violent crimes, particularly where no evidence of such propensity was led in respect of incidents unconnected with the acrimonious end of marriage,” Mtetwa said.

In her defence, however, Marry said it was not possible for her to assault the complainant in the matter, one Delight Munyoro, taking into account that she has a swollen hand and also the sitting position of Munyoro who was in her vehicle at the time of the alleged assault.

“She further erred and misdirected herself when she failed to consider and take into account the visible festering wounds and a swollen hand displayed to her making it unlikely that such a swollen hand and arm would have been used to assault the complainant (Delight Munyoro). Any use of such visibly damaged hand and arm would have resulted in more pain for the appellant (Marry) than to the complainant, who is a stout and well-rounded woman,” Mtetwa said.

“She erred and misdirected herself when she failed to take into account the physical difficulties of a backslap on the left cheek using the left hand on a person who was sitting in a motor vehicle whose right cheek would have been nearer to the applicant”.

Mtetwa further said the magistrate failed to consider and take into account the many weaknesses in the State allegations and instead treated the allegations as if they were proven fact in both cases.

“In all of these circumstances, appellant contends that the magistrate’s many misdirections led her to come to the wrong conclusion and that this court set aside her ruling as being based on the wrong bail principles and that the State provided no compelling reasons why she should not have been admitted to bail.”

In her chronological order of events, Marry said on January 28, 2020 she went to collect her children from school following the ruling by the High Court and when she got there, she saw Munyoro sitting in a vehicle in the company of security details from the army and the Central Intelligence Organisation.

Marry said she then asked Munyoro why she had instructed her (Marry) younger children not to speak to their siblings and Munyoro responded that she (Marry) should be grateful and thankful that she was caring for the children as Chiwenga could not look after them.

“Although there was a verbal exchange between them, there was no physical contact as complainant had armed personnel and was also sitting in the car,” Mtetwa said, adding her client was surprised to later learn that she was wanted by the police for questioning on charges of assault.