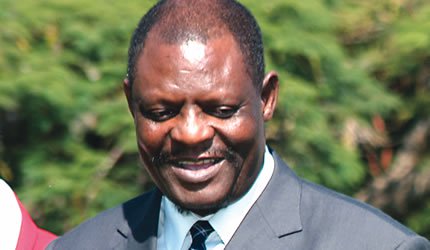 Daniel Nemukuyu Senior Court Reporter
Judge president George Chiweshe has called for restructuring of the entire court system to ensure that judicial officers are evenly appointed at all court levels to equip them to deal with the ever-increasing number of cases. Speaking at the swearing-in ceremony of eight new judges to the High Court bench, Justice Chiweshe said lower courts, which did the bulk of the work, remained understaffed.

He proposed a restructuring of the system to avoid a situation whereby the top becomes heavier than the bottom. Yesterday, the number of High Court judges rose from 30 to 38 after the swearing in of eight new ones. Zimbabwe only has 23 substantive regional magistrates, with 54 court stations and 52 circuit courts.

Justice Chiweshe said the situation obtaining was undesirable and something should be done to ensure all courts were equipped to deal with the high volumes of matters. “We need to restructure the whole court system from the magistrates’ court right to the superior courts,” he said.

“A situation whereby the top becomes heavier than the bottom is undesirable. As we speak, we now have more High Court judges than regional magistrates.” But Justice Chiweshe hailed the appointment of eight judges to the High Court bench, saying the development would equip the court to manage the numerous cases being filed there. He said the people of Zimbabwe had, over the years, become highly litigious and the few available judges were now being overwhelmed by the high volumes of cases.

“We welcome the development and we hope the addition of the new judges will go a long way, easing pressure on the bench and reducing the backlog of cases,” he said.

“Work load at the High Court is getting higher every day. Our people have become very litigious and they all prefer to come to the High Court. They now know their rights to sue. “Again, we are in the process of decentralising the High Court and recently we opened the third High Court in Masvingo. Sometime next year, we will establish another one in Mutare and then Gweru at a later stage. Considering the decentralisation, we cannot say 38 judges are that many.”